In our world today we seem to sensationalize and glorify the acts of people who have done nothing.  I love reality television, but my fascination with it is probably a bit different than most others.  I find the sociological aspects of it fascinating.  It celebrates the norm….or maybe it is more precise to say we celebrate less than the norm.  Supposedly it makes us feel really good about own dumb choices when we see someone on national TV making dumber choices for all the world to see.  For me I watch and think “What are people willing to do this for a tiny bit of fame and why?”  These silly people, often with less self-awareness and character than the average person, become household names.  Because we make them that way.  Because often we seem to celebrate it.  Which doesn’t make me feel good about me at all.  But like I said,  it fascinates me because there are a lot of levels to it that say a bit of who we have become.  And I want to figure it all out, so I can figure out a solution.

Instead of glorifying the bad and mediocre, I think we need to point out the things in this world that are good, and the people who are doing them.  Keep up an ongoing game of “I Spy.”  Remember that game?  I think the adult version should generally start out “I spy something good.”  Or maybe we also need to add “I spy something bad” so people can identify that, too.  Because I think the lines are really fuzzy these days and for some reason people always define fuzzy as good.  Maybe we can add “I spy something mediocre” and help people see that it’s not identical to good.   And for those cynics who buy into the reality tv culture and think only the tawdry is sensational and interesting, the real truth is….good does not have to be boring!

Some of my friends are almost rabid when people use the word “hero” cheaply.  They say simply living up to your responsibilities shouldn’t make a person a hero.  I agree that’s probably right.  But in today’s time, living up to your responsibilities has become way too rare.  Things that used to be rare, are now common.  Teaching your children right from wrong (and modeling it so they can see it in action), paying what you owe (even if it requires extreme sacrifice), looking out for the needs of the others around you, being a good neighbor, being a good employee, looking after your family and friends, noticing injustice and taking action – these have all in some ways become heroic acts to us because they now so outshine the norm.  We have lowered our standards and lowered our expectations of what we should expect ourselves to be.  Not that I am a believer in shaming people for their failures or hiding our own imperfection….but we shouldn’t celebrate it either.

My personal definition is that a hero is an ordinary person who does extraordinary things when faced with a challenge.  Not the definition that others may use, but it is how I choose to define it.  As someone I admire.  From what I have seen the best heroes don’t like the label, because it is inconceivable to them that simply doing the right thing can give them a title that is to them the highest level of esteem.  Which they don’t see in themselves because they just see the ordinary. But our character comes out in these times of challenge and while a heroic act shouldn’t cover over the rest of who we are, it does show a dimension of it….who we can be when we are put to a test.  And at times this needs to be acknowledged and celebrated.  So for me a hero, a person I admire, is someone who simply makes the right choice at the right time.  The impact of that causes ripples that travel the world.

The Presidential Citizens Medal has been given out for over 40 years to Americans who have “performed exemplary deeds of service for their country or their fellow citizens.”  If you go to this site Presidential Citizens Medal you can find out about a few of the recent recipients of the award.  It strikes me that a lot of them are simply normal people, who have used their lives for others.  Many are people who have used their own personal tragedy to make a difference.  I like that we honor this.

There are a group of us who believe Ed Ristaino should be a posthumous recipient of this medal.  When faced with a challenge, he made choices that were a testament to his character.  He was piloting his hot air balloon, carrying five skydivers who were going to jump from the balloon.  When a storm unexpectedly came up (yes, it happens even with all the amazing weather prediction tools we have today), he was faced with the challenge of keeping all of them all safe.  He put the balloon in position for the skydivers to jump, and ordered them to do so.  Right then.  Even though it meant the weight of his basket would drop, which would make it even more difficult for him to land his balloon safely.  All five skydivers lived, Ed’s balloon was ravaged by the storm and he lost his life.  An ordinary American who did something extraordinary when faced with a challenge.

I can argue that Ed was more than ordinary in his day to day life.  He cared for others, in both his job and in his personal life.  He got involved and helped make dreams come true.  He was not a man who was content to just exist and go through the motions.  But simply by saving the five skydivers, he let our country keep five people who in their own ways will change the our country and our world.  That one unselfish act will impact generations.  In both ordinary and extraordinary ways. 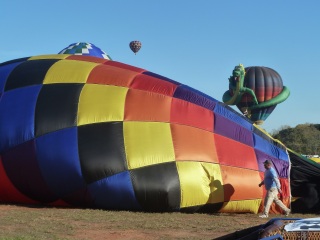 If you aren’t familiar with the “I Spy” game, just begin by telling him “Mr. President….I spy something great.”  Normally then he would guess until he sees what you see.  But let’s suspend the rules of the game a bit and not let this busy man just guess until he gets it right.  Give him a lot of clues so he can see what we see and quickly win the game!  I don’t think in this instance it would be considered cheating.

(Oh….and P.S.  He doesn’t have to be the only one you play the game with.  Your senators, your House members…..anyone who may be able to get the ear of the president and make a nomination is a good playmate!  Here’s another place to get you started….Link to Contact Info for our Elected Officials.  But remember many of them are out amongst us.  If you see them, have an in-person conversation!  And spread the word to all of your friends.  You can ignore the buzz of one little bee, but not the roar of thousands.)