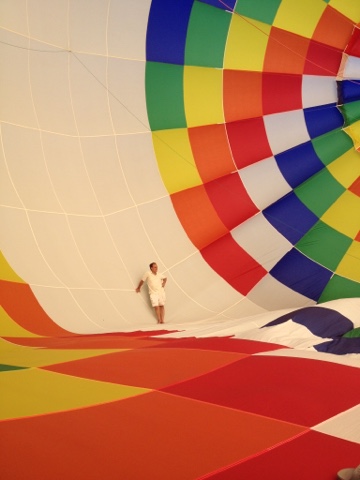 I used to work with a guy named Tony who was of Chinese descent. He looked it. But he was a “normal” American boy, born and raised in Alabama. Really had little connection to his Chinese roots. In fact, when he finally went to China as a grown man be walked around in fear that people would expect him to speak or read Chinese. He couldn’t. Not one lick.

One of my favorite Tony stories had him standing at the front of a line at an ATM. I guess I better clarify that this was in the U.S. He was a bit impatient, so tapped on the machine a few times with his fist in frustration. Sort of like hitting the elevator button again and again, even though you know it won’t arrive any faster. A little old lady tapped him on the shoulder and said to him slowly and carefully, enunciating every word,  “There’s. No. Body. In. There.” He was taken a bit by surprise by it, but said he just smiled at her and bowed, grabbed his money and left. He’s a kind fella. He waited until he was out of her view before he started laughing uncontrollably. When he told me the story, we laughed so hard we cried.

I’m always amused when people tell me they are good with first impressions. I used to think that I was, until I realized that not many of us really are. Often those who think they are just make quick judgments and won’t change them. (Yeah, I know that’s not you. You really get it right every time.) They prefer to keep that initial judgment, regardless of the person’s behavior as they get to know them. Well, if they get to know them. Usually they just accept the facade.

I had a friend in college who we used to describe as “a nice guy…..until you get to know him.” The initial impression be gave off was wonderful, but later you became a bit disappointed when you found he could be selfish and uncaring to his “friends”.

I met another guy in college that I couldn’t stand at first sight. I found him arrogant. He was, at times. Sometimes he had reason to be….he was brilliant and talented and accomplished. But once I got to know him, he turned out to be a sweetheart of a friend….fun, loyal, and truthful. Even in situations when everyone else would sugarcoat things beyond comprehension or simply tell me I was right, when I clearly wasn’t, he never would. He would let me know. Lovingly. Without judgment or change in our relationship.
People are complicated. We are usually so much more than our veneer.  I’m not against intuition, not really even against forming initial impressions about someone based on how they look. Sometimes they are sending a message. Sometimes people do live up to stereotypes.
There are habits and behaviors that do things to your body that you can’t hide. Alcoholics, meth addicts, people with a perpetual frown…sometimes the looks tell their story. But there are also people who naturally have that same kind of look, that haven’t engaged in those habits or behaviors. Someone may not necessarily be the person they look like they are. They may not be anything like the stereotype they represent.
Sometimes I bond quickly with people. It could be for a number of reasons. Sometimes I feel chemistry immediately. Sometimes their sense of humor is the same as mine and they make a quip, or acknowledge one of mine, and an instant attachment forms. Sometimes we share an experience that bonds us. Other times we have so much in common, we just feel like we have been friends forever without knowing the other ever existed.
Other times, though, I’ve just misinterpreted things. I think a bond is there, but find it is a mirage. Or as I’m around them more often I find they are not who they originally portrayed themselves to be. Or all of a sudden I realize that things about them just aren’t ringing true. I watch and realize who they really are, or just give up because there is so much question. Other times I realize I thought they had become a BFF (Best Friend Forever), but to them I was a a TAD (Temporarily Amusing Diversion.)
Even knowing that I am bad with first impressions, it never ceases to surprise me when I find it has happened again. My first instinct had always been to beat myself up. Now I’m learning that perhaps I am not a fool, but simply fooled. And that’s on them….not on me. I went into the relationship with pure intent. Perhaps, for many different reasons, they did not.
But my misinterpretations can also be a delight. I have a theory that if there is someone who really annoys me, I had better just surrender to the fact that God will keep them in my path until I get over it. Normally over time I learn to appreciate the good. Usually there is good there. Sometimes even a jewel.
But I also have learned that everyone isn’t designed to be a close part of my life. It’s OK that they are not my personal preference. I can decide that certain people aren’t my cup of tea….at least not for now. Sometimes they are right for a future season, or belong in the past. If they come back into my life later and I see them or appreciate them differently, I am reminded of the joys of allowing people and times to change….be it them or me.
I think it’s a gift to know I’m not good with first impressions. I continue to look at people and assess who they are. I collect information and don’t allow them to become an unchanging picture, but instead look to see more of their dimension, look to see how they evolve. I look to see how they treat me and others as time goes on. Yes, often I am right in my initial impression. But not always. It’s a pretty cool thing to study in life. Who is as they appear, and who is fooling most of whom they come in contact with? Keep your eyes, keep all your senses, open.
Sure, you can decide you always know who a person is the first time you meet them, but you may be like that lady at the ATM machine and think you’re right, but be very, very wrong. She still thinks Tony is this rather misinformed Chinese guy who doesn’t speak English, while as he told me, he actually is an Alabama redneck (who I happen to know is smart as a whip).