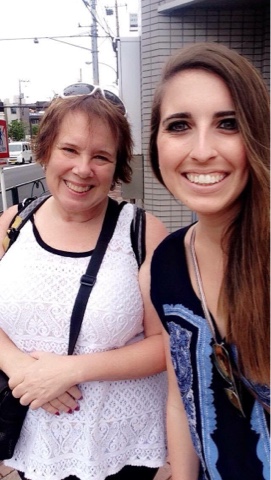 Sunday came. Jet lag has fully set set in. After 12 hours of sleep, I still felt like I needed more. Or maybe coffee. There was no coffee in our apartment and a 2-day withdrawal is worse than one. In case you wondered, coffee withdrawal and jet lag have the same symptoms for me.

We had more friends of Maggie’s to meet that were lovely enough to act our ur tour guides for the day. Maggie met Yuka when she signed up to meet internationals for English conversation when Yuka’s husband was in MBA school in Chapel Hill. A very precious couple Yuka and her husband Yasu were to meet us at the train station at Shinjuku. With very clear directions from Yuka we managed to get there rather easily. We were early enough that I could get a coffee when we waited (Yea!!!!) My choices appeared to be black or with soy cream. I chose the soy cream….go for the new. Good choice. It was delicious, though a bit sweeter than I normally take my coffee. Ahhhhhh……something to take away the headache. I will have it again while we are here. Interesting thing I noticed…..no open trash cans anywhere in sight. We finally found one underneath a table at the coffee stall (a nice lady enlightened us. 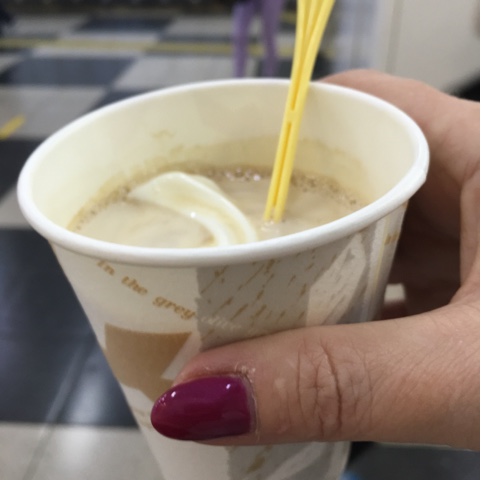 Yuka and Yasu found us and we walked out in the famous square there that I would call the “Times Square of Tokyo.” Sensory overload. It was so crowded  on Sunday (especially when we were leaving late afternoon), I cannot imagine it during the week when they nay proclaim it “crowded”. But it was interesting!
. 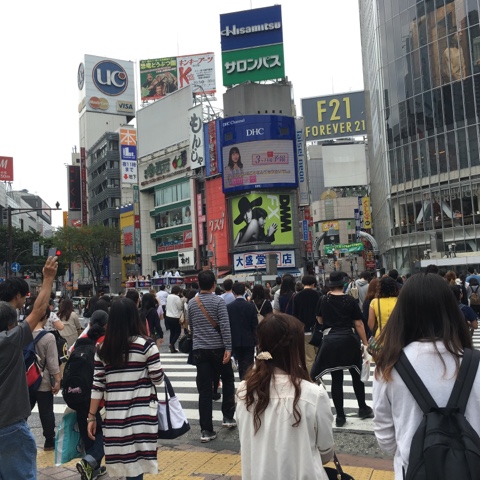 Yuka and Yasu took us to lunch at their favorite restaurant. It specializes in fried pork. This was the first meal that Maggie proclaimed good. It began with different kinds of pickles. Bean sprouts, cucumbers, and white radishes. The radishes were my personal favorite. They gave us some kind of tea, and Yasu and I shared some Japanese beer. It was very good. Then they brought on the main course….the pork and rice and miso soup. Such a great and very filling meal. 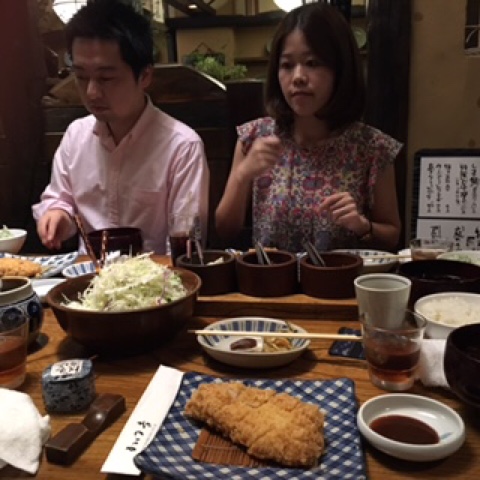 Yuka works for some sort of government agency doing data entry, while Yasu works for NTT, the largest telecommunications company in the world. He has worked for them for 10 years now, and they were the ones who paid for Yasu’s UNC MBA. Because of this, he will have to work for them for four more years (total of five). Yasu says that most people will work for the same company all of their careers. Yasu works incredibly long hours, sometimes going in as early as five in the morning and leaving at 1 a.m. I’d read a bit about the Japanese work life before and Yasu confirmed it. He can’t leave work at night until after his boss leaves.  I confirmed with Yuka a lot of working long hours for these Japanese men is the socializing required…. having meals and drinking together.ling into the night. While we certainly have some of that in our culture, it’s not even close to what they live. Yasu said part of the reason for the long hours is the current state of the Japanese economy. 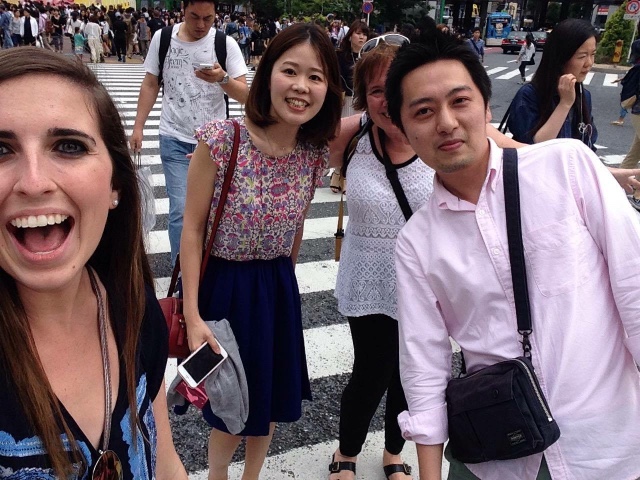 After lunch Yasu walked us over to this huge mall (8 stories high, I think), then left us to work some more when the women went shopping, Those who know my feelings about shopping, know I would have gladly gone to work with Yasu….but into the shopping I dove. Maggie was in her element, darting from place to place. I amused myself by looking at the outfits worn by the customers – amazing people watching. The fashion is eclectic, but mostly appears to be very comfortable. Shirts with English sayings are all the rage – we cracked up at some of the attempts. The stores themselves? Some were so incredibly loud I needed ear plugs. Oh….and you take your shoes off when you enter the dressing room and some stores also required you wear a face mask to avoid getting makeup on the clothes. 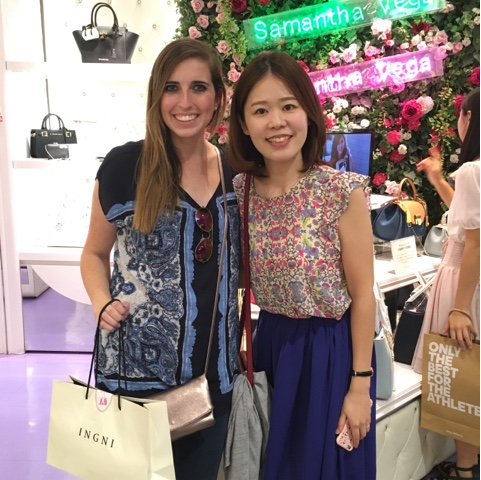 When at the mall, Yuka introduced us to the lounges. It’s not good form here to eat and drink in public, so when Maggie got a water she escorted us into a coed lounge that had chairs and tables where you could relax or eat. After that she showed us the women’s lounge…..which had dressing rooms and makeup stations. Opulent and fascinating! I haven’t quite figured out why you would need to dress and do your makeup at the mall, but people were using it! 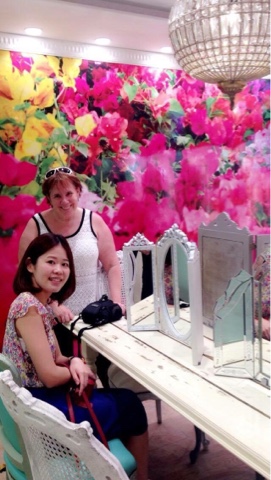 After the mall, Maggie was insistent we find a purikura booth….a photo booth which from (from what I can tell), you can distort your pictures and then draw on them at the end. So OK….I don’t quite get the fascination…Maggie had seen a Japanese friend post pictures and thought it was hysterical! Yuka said she had loved it in high school, and was happy to join Maggie in her quest. I just tried to stay out of the way. It was crowded with teenagers. I still don’t quite get it all, but here is the result of their session. They are fun! 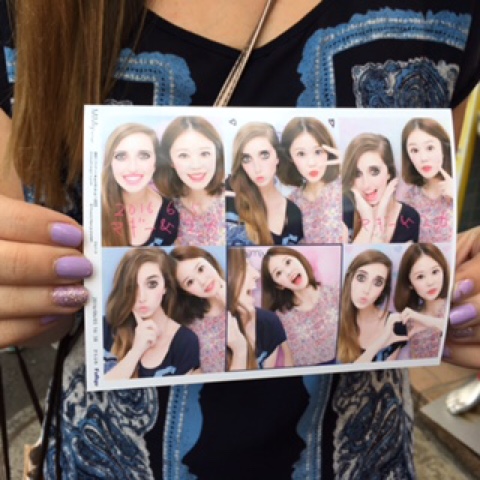 Our last stop for the day was the 100 yen store, our equivalent of the dollar store. I had enjoyed these on my last trip to Japan. Maggie said she could have stayed there all day. I survived for a while, but then started feeling the effects of the day. The jet lag, the fried food, the endless walking, the shopping…I hit the wall. Yuka took us back to the train station, where we began our journey “home”. Another subway triumph, thanks to both of our brains and the kindness of strangers.
I meant to drink ginger ale (did you know you can get it with extra ginger?), take a quick rest and revive enough to go to dinner, but I was out for the count. Poor Maggie was relegated to eating crackers and chocolate for dinner. Sometimes I am a bad aunt.
Today we try to figure out our Japanese rail pass and make it to our hotel in Kyoto. That is our only goal, but I think a lofty one. And food. I am going to try to make sure that niece of mine gets all of her meals. I think Maggie has earned a trip to the Anerican chain of her choice. We’ll see where we end up, 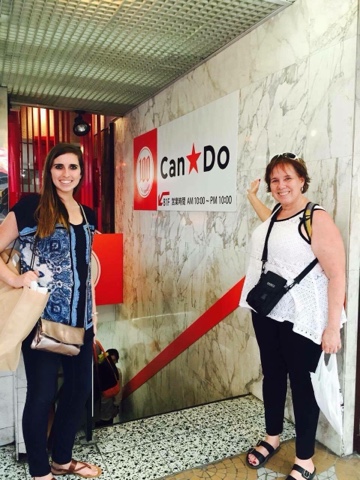