Hey, my city, Statesville, NC, has made the news! Some of my Facebook friends, even those who don’t live anywhere near this area, have made posts about it. You see, there is this big flag flying at a local business, it is bigger than the Statesville city ordinance allows, and the owner of that business says he will not take it down.

It’s created a lot of drama and generated a lot of national publicity for both this business and our city. Statesville is thought by some to be “anti-American flag” (including many in our community.)

For those who have never been here, or have been and not noticed, I’ve lived here the bulk of my life and have found it to be a town full of patriots, many with amazing stories to tell. And there are a heck of a number of flags here.

Many of you who don’t live here, and some who do, see this simply as a fight over the size of a flag. To others, this issue is not currently about the flag, or even about the ordinance.

Let me go on record and say this first…..I tend to usually be on the side of property owners rights, both private and commercial. I purposely do not live in a neighborhood with a homeowner’s association, because I don’t like the idea that my neighbors could dictate what I do on my land. I guarantee there are times a homeowner’s association would be sending me notices to change something, because their priorities are not my priorities. I believe I shouldn’t have to explain these things to them or make decisions about my property based on what the neighbors think. But if I lived in one if these neighborhoods I would have to be compliant with their wishes or face the consequences. Even not living in one, I still have to abide by local ordinances….and, if caught breaking them, I pay the consequences.

When it gets down to it I don’t really care what size flag someone flies or what kind of sign they have outside their business. I’m fine with that being their choice. Yes, even at the expense of my property value.

I also don’t like the large flags that fly alongside interstates. They distract me. Not blaming anyone for this….it is my responsibility to be aware of this quality in myself and take extra care while driving by one. Recently I was driving through Greensboro, it was windy and rainy, and the flag was all contorted. It bothered me. It was distracting. I also get distracted by someone broken down on the interstate, so once again I don’t necessarily feel that government needs to protect me from myself. I have never been in an accident as a result of either of these circumstances.

I don’t feel that the size of the flag flown shows anything about the person or business that flies it. To me people and businesses show what kind of American they are based on how they treat their fellow Americans (and visitors to our country) and how they respect our country….not whether they fly a flag of any size.

I admittedly have a preference of flags at the standard size. We as a country and a people are at our best when we’re not showing how great we are in the big gestures, but in our humility. Still, some people like big gestures.

The current elected officials have elected not to change the ordinance at this time. The owner of the business has elected to continue to fly the flag that is out of compliance. (Note for those not familiar with the ordinance….the flag must be 25’x40′ or under. The flag flying out of compliance is 40’x80′.) The owner of the business is aware of the penalty ($50 a day) and has said he is willing to pay this. Well, he did say that at one time…. now I hear his lawyers are saying he’s not. Whatever. He can change his mind at any time. His decision. His consequences.

I dislike several of the laws and ordinances that we have in Statesville. I’m still miffed about the beautiful murals the city required be removed. I loved them and thought they added character. I think it should be up to the building owner to decide what art appears (or stays) on their building, But once again, the owners of those properties were made to comply with the ordinance that addresses murals. They did. I am simplifying this story because it is not relevant here. Or is it?

If we become a society that allows people to pick and choose what laws and ordinances they obey, all become worthless. To me that is the main issue here. Companies or individuals that break the laws or ordinances, especially those who do so knowingly and willingly and even daringly, may have to pay consequences. Leaders who don’t enforce these ordinances and laws, especially just because there is national attention, are setting up for chaos.

I’d like our local leaders to review all current laws and ordinances on a fairly regular basis to see whether they need to stay on the books. Which really protect and promote our community and its businesses and people, and which hinder it? What’s important to keep and what can we throw out? I’d love them to keep the number at a minimum. But whatever we keep, let’s enforce.

Profits for Gander are currently down. The free publicity generated by the ruckus in Statesville (and those they have participated in elsewhere around the country) hasn’t yet done enough to help. Though personally I think it is a genius marketing strategy, so maybe time will tell and profits will bolster as a result. I’m personally not calling it “that camper place” anymore, so it has given brand name recognition to at least one person. Though I’m not in the market for a camper/RV at this time.

But really….wouldn’t a 25’x40′ flag do the same thing as the current one, plus allow them to use it for doing things like flying it at half mast? (The height of the current flagpole evidently does not allow this.) One of our local car dealerships has a large flag that is compliant with the ordinance and I have no problems seeing it. My eyes are good….I’d probably also notice several of standard size.

Should the ordinance change? I’d be in favor. Should it change right now? I’m fine with them holding strong for a while. Maybe look at a few other ordinances that impact more than one business, those local businesses that are currently being compliant and respectful to their detriment, and change those first.

To the Statesville City Council members, thank you for serving. You take a lot of flack for not only this, but other issues (many outside the scope of your power), and I believe most (if not all) of you try to make the best decisions for our community, based on what you know. I don’t agree with all of your decisions, don’t always respect what you say and do, but I still respect that you volunteered to serve in this way and were voted into public office in our community. I’m not a city resident so I didn’t vote for you, but as someone who loves this city you do get my attention and thanks.

And to Gander RV/Camping World, I also wish you great success. Thank you for adding to the tax basis of our community, employing some of our people, and operating a retail outlet for those who love camping. While I personally don’t care if you fly a flag that reaches the heavens, I also don’t believe you show yourself to be a better patriot if you do. Instead of being the company with the biggest flags, why not spend your money on community compliant flags and be the company who respects the ordinances of the communities you do business in (while fighting lawfully to change them if you disagree)? Why not show your allegiance to our country by gifting homeless veterans with a RV in which to live? It seems like a natural fit. I’m sure our local-based charity Purple Heart Homes could help you get that going. If you’re already doing something of that nature, maybe you can swing the national discussion that way. I love hearing stories of corporations with kind hearts who really make a difference in the world.

And truly I think the ordinance will change in the future. Just not now. Because for now, it’s not about the flag. 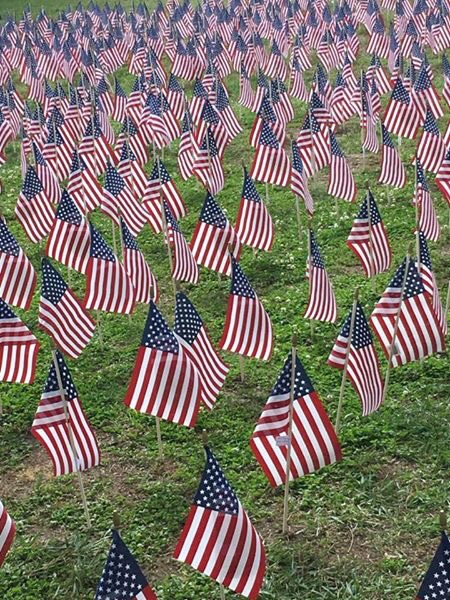