“For you formed my inward parts; you knitted me together in my mother’s womb. I praise you, for I am fearfully and wonderfully made. Wonderful are your works; my soul knows it very well. My frame was not hidden from you,when I was being made in secret, intricately woven in the depths of the earth. Your eyes saw my unformed substance; in your book were written, every one of them, the days that were formed for me, when as yet there was none of them.”
Psalm 139:13-16 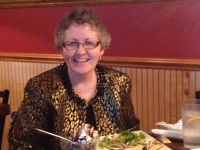 Today is my friend Becky’s birthday.  It is also the day that she buried her mother.

Becky was the youngest of four children and a “later in life” baby for her mom Rosa and her dad Guye.  When she was a teenager she made a commitment that if ever her parents were alone or in bad health, she would be their caregiver.  While a lot of teenaged promises are forgotten, Becky takes commitment seriously.  She remembered that commitment.  When her dad died and the time came, she packed up and moved from her home in Charlotte to her parent’s house in her hometown.  For the past eight years she has been there, with a dedication that goes beyond what most of us can comprehend.  (Or maybe it is just selfish me that can’t conceive of it.)

Becky’s job is in Raleigh, which requires an hour and a half commute each way.  Add in work hours and that’s a long day in itself.  Rosa has been in a skilled nursing facility for the past four years.  In this facility, there is about a 12-1 patient to caregiver ratio.  As Becky says, even with the absolute best caregivers out there, that ratio is not sufficient to give the kind of care these patients need.  So before her commute in the morning and after her commute in the evening, Becky would visit Rosa and make sure her needs were being met.  She would talk with her and try to keep her mind active.  When Rosa got so that making complete sentences on her own was difficult, she would finish those that Becky would start.  “See you later….” “….alligator.”  “After a while…” “….crocodile.”  “God is good…..”  “…..all the time.”

Rosa’s funeral was at Maple Springs United Methodist Church, a church Rosa’s parents helped found.  She and Guye were pillars of that church.  They are both now buried in the cemetery on the church property.  Though Guye has been gone since 2004, he was very much a part of Rosa’s funeral service.  Their lives were intertwined, their faith was intertwined, they were definitely two who became one that day they walked into town to get married all those years ago.  Their four children were with Rosa on the day she died and she held their hands and told them she loved them, and quietly slipped away to heaven. 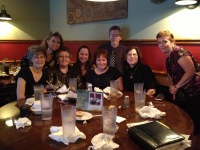 We celebrated Rosa and Guye’s lives today and we worshiped their God.  Afterwards some of Becky’s friends walked over to the graveside with her, thanked God for Rosa and for Becky, then went to supper and celebrated Becky’s birthday.  Some of us were strangers, some were old friends, but there was instant community.  All of us love Becky.  There was laughter, and maybe a few tears.  There was a lot of conversation….a lot of old stories.  A lot of discovery of each other.  There was talk of future fun.  There was the Happy Birthday song, a little cake and ice cream, and a candle blown out. (Twice.  Should have done it one more time so I got a picture of the lit candle.  I can be a bit slow on the draw.)

I am in awe of my friend Becky and her amazing sense of commitment to her mother, and her great gift of mercy.  I love the verse that speaks of God’s knowledge of us before we were ever born.  He knew before Becky was conceived that October 6 would be the day Becky entered this world.  The days that were formed for her are not blank pages in his eyes.  He knew the content of every single one.  He knew that teenage commitment would mean eight years of total devotion and He knew that she could not do it without preparation.  Even with that preparation, there was great weariness and times she could do nothing but depend on Him to see her through.  She did and He did.
————————————————-
“The steadfast love of the Lord never ceases; his mercies never come to an end; they are new every morning; great is your faithfulness.”  Lamentations 3:22-23
————————————————-
God did not forget that it was Becky’s birthday this week….nor was it a coincidence that this was the week that her dear mother’s spirit left this earth.  It was all allowed in God’s perfect timing.  This is the birth of a new phase of Becky’s life.  Once again, birthed by her mother with God’s full knowledge.  As Becky’s friend, as one of many who will be praying for her during this time, I look forward to see what God will do in her life next. Because she will be used by Him.  (And if one of my specific prayers is answered, she will also have some crazy fun and relaxation.)

Tonight at dinner we toasted Rosa’s life with glasses of water.  It seems fitting for a lady who from all accounts lived her life purely and well.  Now as I write this, I would like to make another toast (or a prayer of sorts) to all of the caregivers out there.  Grab your glass and join me!  “To the caregivers, those by relation, by profession and by friendship.  May God grant you strength, peace, power and refreshment and may you not feel alone in your burden.”  You are God’s hands on earth…..and I salute you.  And I will pray for you.  You are not alone.
————————————————-
“The Lord will guide you continually, and satisfy your needs in parched places, and make your bones strong, and you shall be like a watered garden, like a spring of water, whose waters never fail.”  Isaiah 58:11