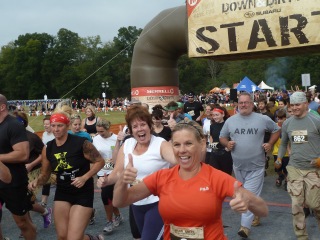 ― Little Engine That Could

Yeah, I admit it.  When I used to watch Captain Kangaroo, I always loved when they told the story of the “Little Engine That Could.”  I’m a sucker for the underdog, I am a sucker for stories, and simple stories like this have changed my life over and over.

For those of you who don’t know the story, you have missed out on a good one.  Go find a copy and read it, but to sum it all up quickly there was a train, filled with all kinds of things like toys and food that were to be taken to children on the other side of the mountain, that needed help being pulled over.  The big trains were asked, they all had excuses.  They were too good for it, had more important things to do, they were too tired.  The little small train that had never even crossed the mountain (let alone haul another train across) was asked, and decided to give it a try.  All the odds were against it, but it started chugging away and saying to itself “I think I can, I think I can, I think I can” all the way over the mountain.  And it could.  And it did!  And it’s chugging switched to “I thought I could.”

I’m at a point in my life where that story really is coming alive.  Good thing….or should I say, just in time!  I’m learning how much bad messaging I allowed in my brain over the years….and how I let that stuff shove out the good messaging that was in there, too.  One of the biggest things was the idea that I was a bad athlete.  OK, so I kinda am.  But even though truthful, that bad messaging crowds out some equally true and very important thoughts.  Like “most people are bad athletes if they don’t do anything athletic.”  And “it’s hard to be be a good athlete if you don’t work at something long enough to see progress.” And “being a ‘good’ athlete isn’t important….being an athlete, however, very much is!”   Because an athlete isn’t someone with natural athletic talent, an athlete is someone who tries athletic things.

So the good messaging is now coming back to me.  The things we feel when we are young.   That doing active things is fun.  We run just because it feels good.  We make up rhymes and jump rope. We play hopscotch.  We play Red Rover.  We get on our bikes and ride all over the neighborhood.  We play PIG or HORSE with a basketball.  Fun and easy and only competitive in a silly way.  Usually whatever we were doing was accompanied by much laughter.  With our friends. 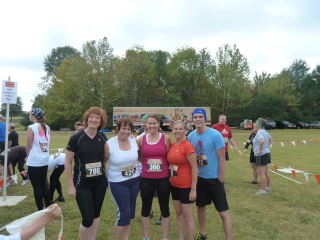 This past weekend some friends and I did a Mud Run.  We promised ourselves going into it that we would just have fun with it.  No, we did not train for it.  Well, we looked at the website.   But we didn’t even do that extensively!  And OK…that probably doesn’t count as training.  We just went and did it!

I’ve been trying to run for the past couple of years.  I was good with a walk-run combination, but couldn’t seem to get my endurance up.  Couldn’t run a mile for the life of me.  I had tried the Couch 2 5k program once before and failed miserably.  I got discouraged very early on because I just couldn’t do it.  My friend Patsy (one of my mud run partners!) suggested I try it again and go into it knowing I would do it at my own pace and any week that especially challenged me I could repeat.  The program is normally nine weeks, but Patsy said if I needed to take a year to do it, that was OK.  So I went into it with that understanding.  I think it was Week 4 I had to repeat.  There were two five minute runs in there…..the first one I could get through OK, but the second one was horrible.  It discouraged me.  I asked what the others thought in one of the Facebook groups Patsy leads and someone said “Repeat!”  So I did.  That was the only week I had to repeat. After that, while the runs got harder (they went from 8 to 10 to 22 minute runs all within one week!), but I endured.  I even got through the 30 minute run that I had to do at the end.  I can’t say yet that it is easy for me or that I am able to do that any time I run now, but I know it is in the realm of what I can do.  I will continue to work at it.  I will continue to change my mind of what is possible for me.

So here we have me…..a very novice runner…..who has done nothing else to prepare for this mud run.  For those that don’t know what a mud run is, it is a 5k run (in our case it turned out to be 3.6 mi instead of the 3.1 5k distance), with obstacles along the way.  We had seen a few on the website, but hadn’t really paid a whole lot of attention to them.  The first time I looked at them they looked fun.  When it got closer to the race, they weren’t looking quite as amusing.

The first obstacle was to grab a bag of sand, and run up and down a hill with it.  That one was fine.  Then we scaled a few walls. We hit a mud pit where we had to crawl under a net. We had another net over grass that we had to crawl under.  We had to do 10 pushups (I didn’t even remember the last time I had done a pushup so that panicked me a bit.  But one of the volunteers counted for me and as long as my stomach hit the ground and went back up, she counted it!)  We had a net ladder to crawl up, and then we got to go down an inflatable slide (probably my favorite.)  We had to “run” through this freezing cold creek….with a very uneven bottom so that sometimes it was chest deep on me.  At the end we had to climb up a wet muddy bank. They had two guys there to lend a hand and the one that grabbed me was awesome.  He made pulling me off seem effortless.  I am forgetting what some of the obstacles were, but you get the 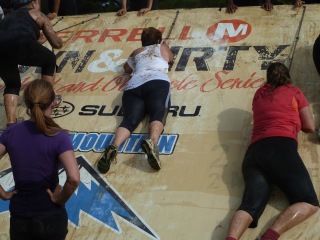 idea.  The last three were a rock wall we had to get over, and then this slippery wall with ropes midway up that you had to lunge for and use them to pull yourself up on your stomach and over the top, and another mud pit that you had to go through on your stomach.  The slippery wall was my nemesis.  I didn’t think I was going to make it.  (OK…I figured I would do it eventually because I was determined, but thought it may take hours.)  My friends Joanie and Patsy stood on the other side of it cheering me on.  Our other friends were behind me cheering (even if I couldn’t hear them I was focusing so hard!)  Joanie reached out her hand to grab me. Finally I made it…..a major victory. 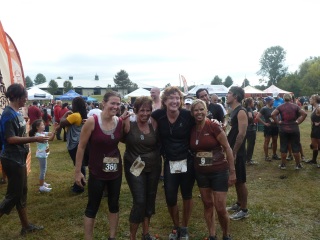 Joanie and Patsy and I went through the mud pit and crossed the finish line together.  I slowed them down a bit for the day, but I think we all enjoyed going through it all together.  I know they made it more fun for me!  I will have great memories of their care and kindness and encouragement, of the triumphs and of the silliness!  (Yes, I do hang out with the coolest people!)

And I plan to do it again.  That thought process will still happen every time I run in the near future, because that challenge is not yet over.  But I will also try to conquer some new challenge.  There are so many to choose from!  And I will work my way through the process and remember it is natural to feel doubts.

Who knows what my crazy friends will get me into next (or me them)?  But these sorts of things do add color to your life.  (I guess our color for mud run day was brown.)  They change the way you think of yourself.  They keep you remembering that the image of what you are is not exactly who you are….it’s only a reflection, without all the substance.  The real you is much more capable, much more able to climb over the mountains that look impossible to climb, much more ready to accomplish something that you never thought you could.  At whatever stage in life we are, we can surprise ourselves with what we can do.  But first we have to be willing to try.  That’s it.  What’s next for you?  Failure is better than not trying.  And there is nothing wrong with trying until you get it right.  Not trying means you can never do.  Think of something, and just go for it.  You will remember you are alive…and created for living!