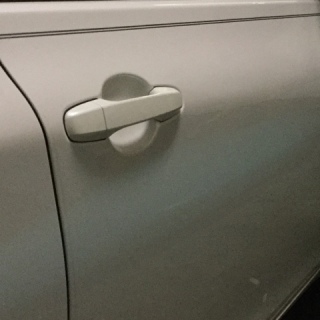 I hung out with my brother Scott last week. I enjoy all of my siblings, so spending time with them one on one is something we should do more often (because of course they love spending time with me, too.) I have two brothers and two sisters, and generally our time together is en masse with our whole very loud and crazy family …. where a little bit of chaos reigns. The time together that day was spontaneous and fun and easy and quiet. We had lunch and then he drove me around as I looked for furniture. My attention spanned waned before his did (my shopping genes were definitely inherited from my father.)

I was reminded of something about my brother that day, though. He’s a gentleman. Each time we returned to his car (quite a few times really), he opened and closed the car door for me. A nice gesture you don’t see much anymore. He’s always done it…..since we were teenagers. (I remember commenting on it once back then and he said “Well, I do it for real girls Kim, so I may as well do it for you.”) It’s now something he does with ease and without thought. It is part of who he is.

I know some women think such a gesture is demeaning….that it says they are not capable of opening the door themselves. I never have. My brother certainly knows I am capable of opening the door. He shows me on an ongoing basis that he thinks I am intelligent, and strong, and brave. My parents raised strong…..and strong-willed…women and both of my brothers have always respected that. Possibly because we would have beat them up when they were younger if they ever implied anything else.

What made me think that day was this….how often does my tendency to bulldoze through life mean I don’t allow people opportunities to offer me common courtesies? Oh, not all men open doors for women and I am fine with that. It’s not a necessity. Some women have been quite vocal in seeing it as an insult, and I can see why it may make many men give up the practice. But my brother is confident and comfortable in the gesture, and after all of these years a part of my unconscious brain may expect him to do it. I wonder if my unconscious brain often blocks the opportunity for me to accept the gesture from others. That for some reason I have assumed they won’t offer it.

I try to be courteous in my everyday life. If it makes sense,sometimes I open the door for others, men or women. I think I am pretty good with the “please” and “thank you”s. Living in the South we usually have that part down cold. Sometimes maybe to the point that we say it by rote and don’t really mentally acknowledge the nicety that was offered us. Sometimes we don’t look into the eyes of the person offering the gesture and smile as we say it, so they know we’re not just mannerly but we really noticed them and the courtesy. I don’t know about you, but I could be more thoughtful and intentional.

I’ve been a bit stunned by lack of courtesy I have seen by people lately. The hurt that I see dished out on a daily basis makes me despair sometimes. Too often we see people slamming doors in the face of others instead of opening them for them. Either literally or figuratively. Unlike my brother, too many extend the courteous gesture only to “real girls”….those who they’re trying to impress with a gesture that is less about courtesy and consideration than getting rewarded in some way later on. They may open the door for the one they are with, but let it slam behind them, oblivious to anyone left standing in its wake.

I’m going to make an effort to bring more common courtesy into my life, with intention. For friends, family, and strangers. I want civility in our world. I want kindness. I want consideration. I want respect. Whether your culture, religion, skin color, age, political views, alma mater, financial status, community position, or circumstances match mine or not. I’m not going to only try to extend it to others, but I am going to try to be more aware of accepting it graciously when it is extended to me. I am going to try to be more on the lookout for those who want to exercise their manners. Will you join me? These little gifts should be both made and acknowledged. I think we’ll all be better for it. Opening doors is easy. Courtesy without caring whether that gesture is returned or acknowledged is a bit more difficult. We need to make it our habit. I believe that habit can be contagious.