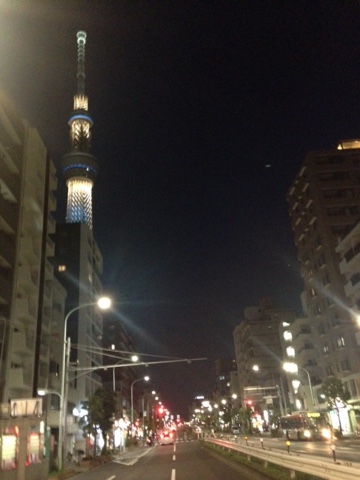 So we left Vancouver and had a bit over a 9-hour flight to Narita Airport in Tokyo. The flight was fine. I don’t mind long flights, and ough Maggie was dreading it she agreed it was fine. You have your personal entertainment center and since I rarely get to movies these days, I had plenty of choices. I watched two during the flight. We napped….not enough, but a bit. We were fed two meals, chicken or beef. One was with an Asian twist, one more Western. As much as I love air travel, my body doesn’t….so I mostly ate bread and butter and fruit and some nuts I had packed.

We sat in the middle aisle of seats and our seat mate was a Japanese guy from around Kyoto. He is a soon-to-be-Masters grad in film at UCLA. He was headed home for just a week to attend his brother’s wedding, then back to UCLA for graduation. He was the perfect seatmate. We talked movies, and laughed at the differences in reviews that you get from different folks, especially in film (my college major was Radio, Television, and Motion Pictures, so my classmates were mostly creative types.) Maggie and I have so few plans for our time here that we ask everyone we meet from an area what to do when we get there. His recommendation in Kyoto was visiting several shrines….Maggie took notes.
So we get to the airport and start the trek through immigration. There was a medical station at one point, and Maggie said it took our temperatures as we walked through. I guess we made the cut. There were drug dogs sniffing around….at least this time they didn’t force them to my luggage (story for another time.) But I loved watching the dogs handle their handlers.
Maggie had her first encounter with a Japanese bathroom. Her question….what is the difference between “spray” and “bidet”? I have no clue. I figure one of you will enlighten us,
We picked up our backpacks (our “big” checked luggage) and as I removed the rain case from mine a pair of glasses fell out. I must have looked a bit stunned baecause Maggie said “Oh, your glasses.” But they weren’t my glasses! We took them to an agent. Well, took them to one, who sent us to another….you know the drill. Someone finally accepted them.
We made it out and tried to buy train tickets. We needed cash, so changed money. I believe the exchange was somewhere around 105 yen to the dollar (liking it up online that probably wasn’t the best exchange rate. But not bad, I’ll be calculating based on 100yen to the dollar…because that is close enough for me.
We then bought our subway tickets. Well, Maggie did. I am making her do all the hard stuff. The subway was a bit tricky, mainly because we had to change lines (the guy whose apartment we are renting said we wouldn’t need to), but we made it. This time we walked about a block out of the way, but some nice ladies sent us straight and we found our building. (Maggie asks for directions sooner than I normally would, Definitely not a bad thing.)
We chose an Airbnb apartment for our first accommodation, I figured it would be a good way to see how the Japanese live. The guy we are renting from gave us detailed instructions. So….to get the key we go in the front door and there are some mail boxes to the left. Found easily. You stick your hand in a slot in the mailbox (which did not have the number on it shown in the picture he sent us), and there is a container that holds the key. But you can’t open the mailbox itself.,..you have to stick your hand in and put in a combination and the key container opens. Maggie got the combination in and the box opened. Then you have to get the key out. It took us both taking turns to get it. I got it out of the box, but it fell. Maggie was able to eventually grab it. Whew! The directions didn’t seem that hard, We inserted it in the front door and were able to make our way into the apartment building and take the tiniest elevator ever to our apartment.
The apartment is small, as we expected. You take your shoes off at the front door, where there is a closet with assorted slippers (and umbrellas and such…the guy definitely is hospitable.) You walk through what seems like a hallway, but is an efficiency kitchen, and two doors on the other side for the very small toilet and shower rooms. I’m including a picture of the toilet room. When you flush, the water on top turns on to wash your hands, while the water flows into the tank of the  toilet. They recycle. Smart. 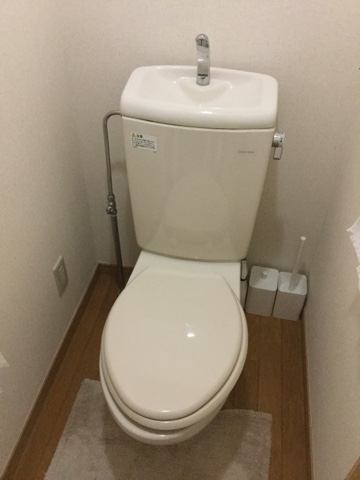 The living room contains a futon, which is our bed. Figuring out how to use it, when exhausted, had us laughing  in frustration. But we did it. It’s tiny and we haven’t quite figured out how to use it comfortably, but it’s fine. We slept.
We figured out the air conditioning, which works but not as cold as we would like it. It only goes down so far. But better than our Vancouver room!
I can’t wait to explore our neighborhood, which is near the sky tower pictured above. We have a view of it from our window, though Maggie snapped that picture when we were on the street.
As I write this, it is around 8 a.m. on Saturday the 4th….we are 13 hours ahead of our NC folks. Maggie has gone back to sleep for another round. She woke up and we ate the yogurt we purchased at the convenience store last night and she decided she could get a bit more rest.
We meet her grade school friend Shino at 11. She is traveling 2 1/2 hours by train and will return home tonight because she works tomorrow. Maggie has not seen her since she returned to Jaoan when they were in 8th grade. We are going to the zoo, where we will have lunch, and then visit a few of Shino’s favorite places that are around there. We will have lunch in a noodle shop….I suggested that as I think Maggie may actually enjoy them. Shino is going to locate a good one. Maggie has only tried sushi once before and had a mixed reaction…but she will try it again! And if we don’t find any she likes, there is food of all kinds, and we will make sure she eats. I like that she is willing to go out of her comfort zone, though. To be a real traveler, you don’t have to like things….but you really should try things. I think that’s good life advice in general.
The picture in the wall here in our room says “One day I found the truth. I was not living in the past nor in the future. I was living in this very moment. And the moment was precious. So I thought ‘Life is good.'” We’re trying to live that on this vacation. I wish the same for you, wherever you are, whatever your circumstance. More later! 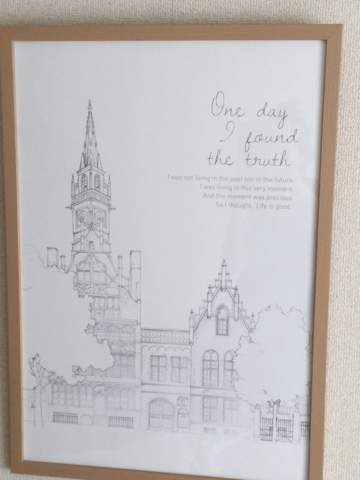