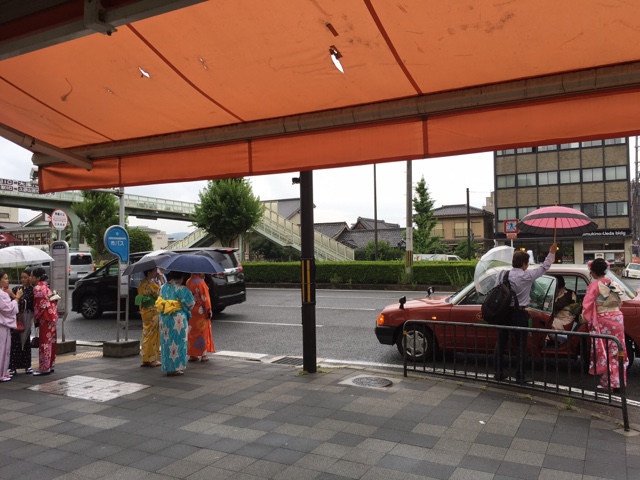 We hadn’t made strong plans for our Hiroshima trip, so when I could tell Maggie was enjoying sleeping in, I decided she probably needed the rest. Well, until I needed to check out the very loud expresso machine for a caffeine fix. I didn’t know it was loud, but yeah….think jet taking off in the room. Any regrets about waking Maggie? No….I am a bit selfish when it comes to the first in room coffee I have had on our trip.

Travel is tiring. Maggie wanted to wake slowly. Well, after the initial shock of the coffee taking off shocked her awake. Plus it was raining….not ideal for touring Hiroshima. So, we decided on a lazy day in Kyoto,
Oh, I know we’re supposed to go to the golden shrine and the silver shrine and such and I am sure we would have enjoyed that. We learned they were about a 30-minute cab drive away (we’re staying in central Kyoto) But as I keep reminding myself, this is Maggie’s trip and needs to reflect who she is now. Maggie is not really about shrines and history and such. She is 21, and still very in touch with her inner child. She loves to play. I do, too. So we went for a fun day in Kyoto.
Maggie was smart enough to pack a rain jacket, and she wasn’t even aware rainy season was starting. I was, but yeah….never packed one. So I get wet. We’ll see if I buy one before the trip is over. Strong possibility. 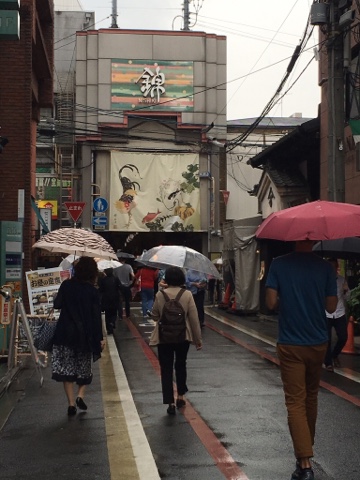 We first went to the food markets. So many interesting things, I wish we had her friends around to tell us what some were. We tasted a sweet sake from one of the vendors. It was good….but we didn’t want to carry a bottle around. We started looking for somewhere to eat. We were looking for a Okonomiyaki (savory pancake) restaurant that the concierge had recommended…..one of the things I had not yet tried. We never did find it, but Maggie saw a “real” pancake house. OK….I knew dinner was possibly not going to be to her liking, so it was local and not an American chain…..I was in! The pancakes were thick. Not very sweet. I had carmelized bananas, she had fruit and chocolate sauce. There was whipped cream….something I would normally say “no” to….but we both agreed it was great. OK….not the typical lunch, but we were full when we left and it really was good. 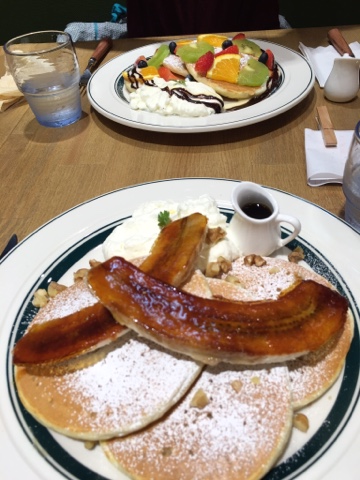 So then it was time for the high point of Maggie’s day. Time to play dress up. We went to a place where she was made up and dressed up as a geisha. Well, actually as a maiko….a geisha in training (she liked the outfit choices better.) I opted to watch (I had done something similar with my friends the Bradys when they lived in Okinawa) and truthfully it is pretty fun to watch and relax,You wouldn’t believe the layers of fabric that it takes to make a geisha. Maggie said she could barely breathe. 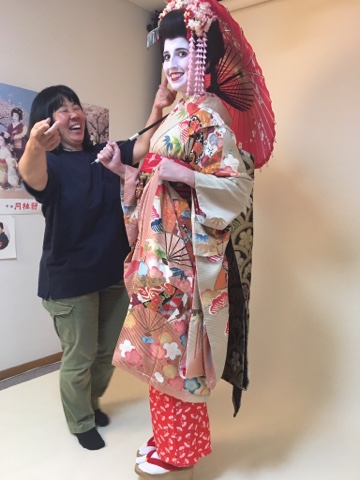 A Japanese mother and daughter were there when we were and I believe they were fitting them for their “to keep” kimonos. I knew Maggie would covet the pretty pink one of the daughter….and she did. 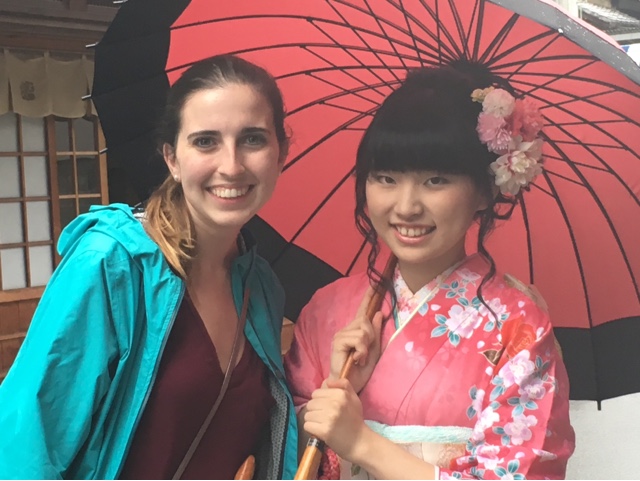 Maggie’s friend Shino tells us she mostly wears a kimono on ceremonial occasions…. most recently her college graduation. We have seen many on the streets, though.

After the maiko adventure, we ran back to the hotel to relax before our evening. It was then I realized we had not gotten tickets for Hiroshima tomorrow. The concierge had recommended we do so because she said the lines in the morning can be long. So while Maggie got ready for the evening, I took off running for the subway. I easily found the station at the directions of one of our bellmen (have I said how much I love the staff here?) and made my way to Kyoto station, where the train office is. I tried to remember the stop and the subway line and even landmarks to where it was. It’s easy to get screwed up and go on the wrong line. The train office was through a mall area and then out across the street in another building. I only stood in line a minute, completely knew what train I wanted (thank you precious concierge), had the necessary passports and passes, and within a couple of minutes I had tickets.
I ran back across the street and where I needed to catch the subway, but my first issue was all the subway signs were in Japanese. Usually there is something with English, but I couldn’t find it.  I then try the machine, find the English button (we have been doing it in Japanese after watching Shino a few times) and tried to find the station. I should have written it down. What I thought it was….it wasn’t. I’m starting to get anxious because we were supposed to leave at 5 to get to the meeting place for our dinner tour we had planned. It’s about 10 minutes ’til. So….I try to find something on the internet that shows the station. Nothing.
I must have looked perplexed because a sweet Japanese guy touched my elbow to get my attention and looked at me as if asking if he could help. I showed him the hotel name and he didn’t know it, so he took me to the tourist information booth and waited to make sure a very slow agent helped me. (God bless that sweet man!) While the agent started typing things into a computer,  I saw a diagram of the stations in English and said “That one….that’s what I need. It’s 220 yen, right? Where do I get that ticket?” She acted like she didn’t hear me, and finally as if in slow motion, pointed to a machine. I was off. I get the ticket, run down the subway stars, and realize I don’t know what direction I am supposed to head. The one I think is right doesn’t match up with the diagram I find on the wall. So I go with the diagram, and chose right. I text Maggie and tell her to meet me in the lobby.
Luckily I remember the direction I am supposed to leave the station and run back to the hotel. I tell the doorman we will need a taxi but I have to go to the lobby to get Maggie. I go into the lobby. No Maggie. She had run back upstairs because our internet doesn’t work in the lobby and she wanted to text me again (she didn’t get my second text because she had thought I was already in the lobby.) I texted her and told her to run down fast, and she did.
We managed to arrive at the meeting place at another hotel close enough to the time that we could fake out the tour guide that we had been looking for her. She comes and points us into another cab, with another couple of tour members, Terry and Sue from Australia. We started talking with them and fell in love with them immediately. They were an older couple who were very well traveled. We stuck with them through the evening show and on the walk to dinner. 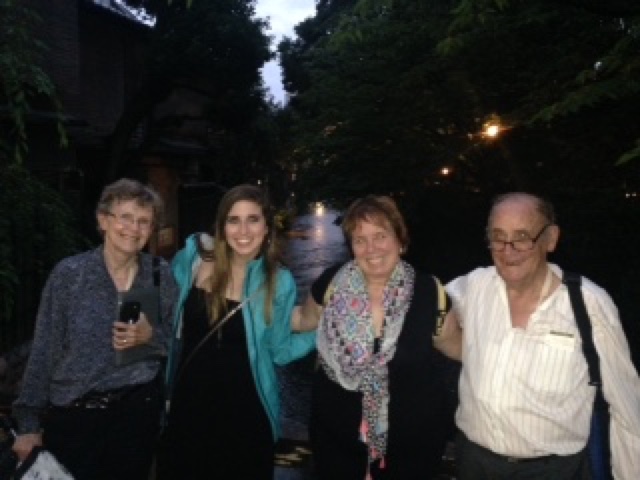 The evening show….it was essentially a cultural tour of Japan. Not too long, but started with a short demonstration of some of the womenly arts (tea ceremony, flower arranging and Japanese harp playing). Next was a demonstration of court music, a comic play, dance, and a puppet play. So OK….it was all fine, but the ADD side of me got obsessed with a couple of Japanese men and their cameras. The one in front of me had an awesome camera with a great telephoto lens. He used it like an point and shoot…no zoom and pretty bad pictures (I could see what he was shooting), I wanted to hold out mine and say “Wanna trade?” The other guy was using his cell phone to record the acts. In between he would turn it on himself. I don’t know….cracked me up. 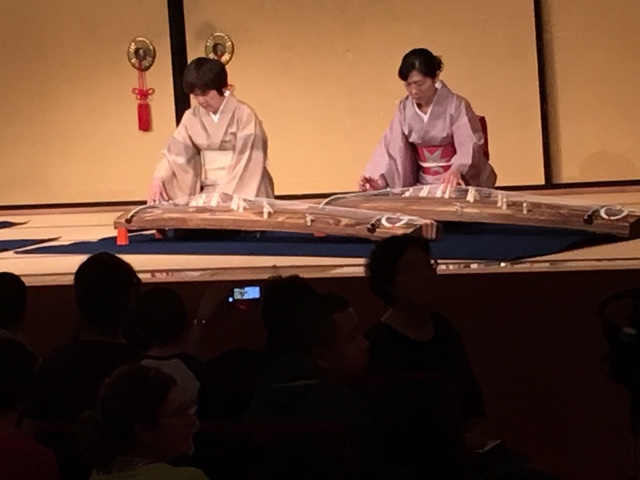 We walked through the streets of Gion, where the geishas are usually hanging out. I think they stayed in because of the rain. We head over to dinner and poor Maggie….it was a vegetarian tempura meal. Lots of tofu and soy and strange leaves and vegetables, She liked the green pepper. And the rice. I thought it was all interesting….though most of the time I didn’t know what I was eating. I meant to bring the menu home, but forgot. Anyway, the bossy folk in charge separated us from our buddies Terry and Sue. We didn’t like that. But we were grouped with a young woman from Singapore (there by herself) and a couple that seemed to only speak French. 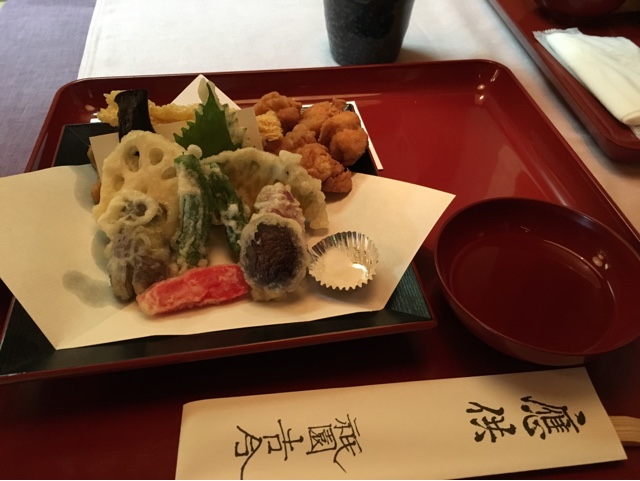 After dinner there was a tea ceremony and they led the five of us there. It was not handicapped friendly and the French lady seemed to have Parkinson’s or something similar, The young guy that was leading the intro to the tea ceremony seemed oblivious to this couple. Maggie kept staying behind to help, but there were wet rocks and the terrain was uneven. Finally the guy got a clue. Eventually we all made it to the tea house.,.,where those of us besides the French couple had to go in a dog door. So maybe it wasn’t a dog door, but it felt like it. But that’s evidently how the tea houses work, That was the doir and what looked like a door was actually the window. (They did let the French couple in that way.) The French couple continued to do the tea ceremony their own way, which made us giggle a time or two. They disobeyed all of the ritual and simply drank the tea down. We enjoyed them. The ceremony was fun overall and a good ending to our evening. They put us in a cab back to our hotel and now we’re enjoying night two of our three-night stay. Tomorrow really us Hiroshima, though we haven’t made strong plans for the day. But we have our tickets and we will see what we can find. 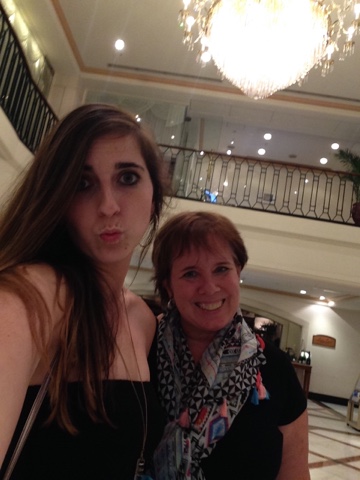