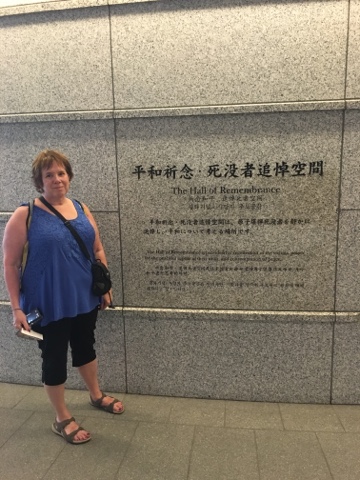 Yesterday was my personal indulgence….the one “must do” for me on this trip to Japan. It was a visit to Hiroshima, one of the two sites bombed by the Enola Gay in 1945. I became fascinated with World War II in high school. It is a time in history that I think shows us the worse of humanity, but then of the power of hope and peace. Hiroshima is a great symbol of that for me.

Hiroshima has been in the news lately with President Obama’s visit, and people got up in arms about a supposed apology for the bombing. Personally I didn’t get the outrage (especially since the apology was another thing that by all accounts didn’t happen). I believe I know why our military made the choices they did and have read some of the accounts of the folks making the decisions. Most do not regret the action, but tremendously regretted the impact on the Japanese people….especially the many women and children who perished or whose lives were forever changed by the aftermath. Sometimes apologies do not mean you think the action was wrong, but you deeply regret the impact of the action. That is how I feel about Hiroshima and I don’t understand those who can’t think of the destruction caused and regret it too. Even if it was necessary destruction to end war and preserve peace, even knowing Pearl Harbor happened. Killing innocent people is horrible and wrong, regardless of who does the killing. War is full of horrible paradoxes of life and I struggle with it. 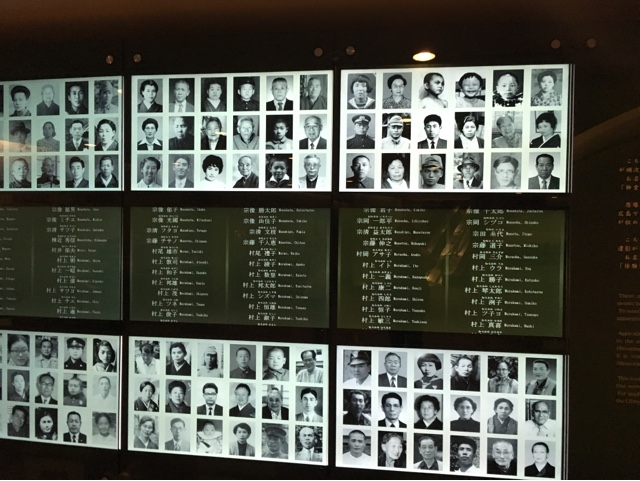 I was trying to explain to Maggie a bit of how I felt before we left. I just wanted to be there…pray on their land, and leave behind a bit of love and peace. Just as I felt when visiting Pearl Harbor, or walking through the Holocaust Museum.
We took one of the bullet trains. A journey that would take more than five hours by car (maybe less if I were driving), takes just over two on the train. We maneuvered the subway and the train station and together found our track. Once again, Maggie is a great travel partner. I often feel like high fiving her. If I miss it, she catches it. We have really had few missteps and all of them have just been a matter of steps. I believe we are about ready for the Amazing Race. I know I would have to eat the gross stuff.
The trains really are amazing. So very smooth. You ever realize how fast you are going until you are at a stop and another train passes. They are very comfortable, with air conditioning. The announcements are in Japanese and English and the English is easy to understand (not the case everywhere in Japan.)
It’s fun to see the scenery as you pass. Even the small towns have many high rise buildings. They certainly build up in Japan. Many of the buildings are narrow…they told us in Kyoto that at one time the Japanese taxed based on the width of your entrance, so buildings were long and narrow. The architecture still seems to embrace it.
727 Cosmetics signs are everywhere along the route. They have evidently embraced the South of the Border style, albeit a bit less tacky. Maggie and I said we need to look for them in the stores here. See?, Advertising works. 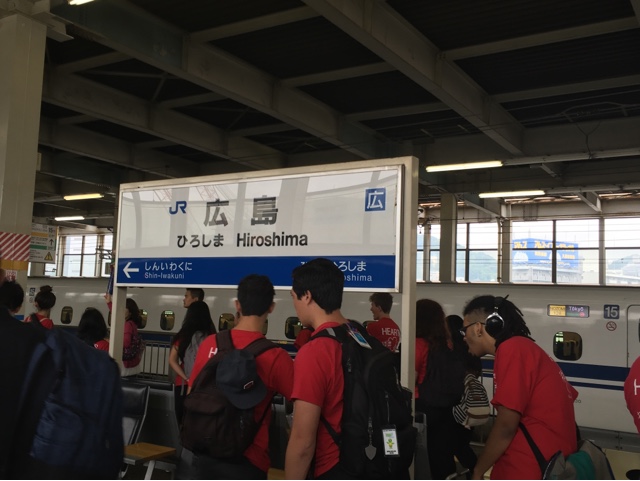 We got to the Hiroshima terminal and decided to take one of the streetcars to the Peace Park. It was a short ride from the station. The park is unbelievably beautiful and serene. We wanted lunch, but nothing was appealing to us, so we got gelato (I will eventually decide that was a mistake since food options did not improve). We eventually made our way to the destination I most cared about, the Victim’s Museum. I publicly apologize to Maggie for this….the depressing nature was out of scope with our trip, but still I needed to experience. 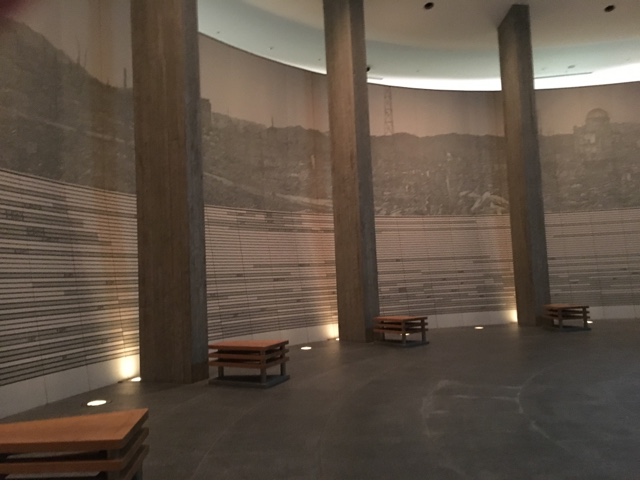 This picture is an amazing room that is round, with scenes of Old Hiroshima on the walls, bricks with names of some of the casualties. There is a fountain in the middle, symbolizing healing for the people. It is a great place to sit and reflect and pray…..a special time and place for me. Then to the survivor’s stories. There is a film that talks about the impact it had on some survivors, and also audio, video,,and written accounts from others.

One of the most touching to me was a man whose account I read, He kissed his wife and his baby daughter before he left for work, and then headed on his way. He actually got a bit off schedule or he would have surely been killed. Afterward he describes how he searches for his family. His two older daughters (who were at work themselves) survived, his wife and baby daughter perished. What grabbed my heart was his narrative about how he searches everywhere for them all. His agony and helplessness, mixed with with his resilience and persistence. It reminded me of accounts of people searching for their loved ones after 9/11, but with less communication available to them. Such sadness. As I said before, though I think I understand why it happened and trust the military made the best decision they knew to make at the time to keep our country safe, the fact that moms and their children (or single women of the childless or men, soldiers or not) faced such fear and death and injuries that impacted them for years to come….how can we not have regrets?
I could have spent days in that place, but Maggie needed more fun. We headed to Miyajima. We’re at the total exhaustion part of the trip and everything seems like too much effort for the reward. This was a long day. Going to Miyajima required we take a bus back to the station, a 40-minute train ride across town, then.a 10-minute ferry ride to the island. Oh…..and remember. I haven’t fed Maggie a meal all day (just gelato). We kept looking for places, but she needed Western food and choices were slim. So during the 40-minute train ride across town I think she hated me a bit. I had no clue whether it as right to push her do do it or not, but I knew she didn’t want to explore the Peace Park or museums, so this seemed like a good bet. She perked up a bit on the ferry ride. It was beautiful. She said “I’ve never seen anything that looks like this.” Then we got off on the island. 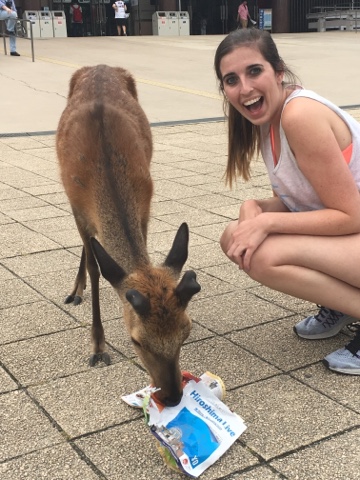 When we left the terminal, we walk out and see a couple petting a deer. We try to get closer. The woman warns “They love paper.” Maggie was holding a brochure and in her excitement she dropped it. The deer went wild. It’s evidently their snack of choice. They were a riot. Even funnier was Maggie trying to get them to pose with her. We soon realize deer are everywhere….and they are in the prowl for snacks. We watched them destroy a sack lunch of a Japanese tourist. They definitely lifted our moods and restored our energy. What a great time. 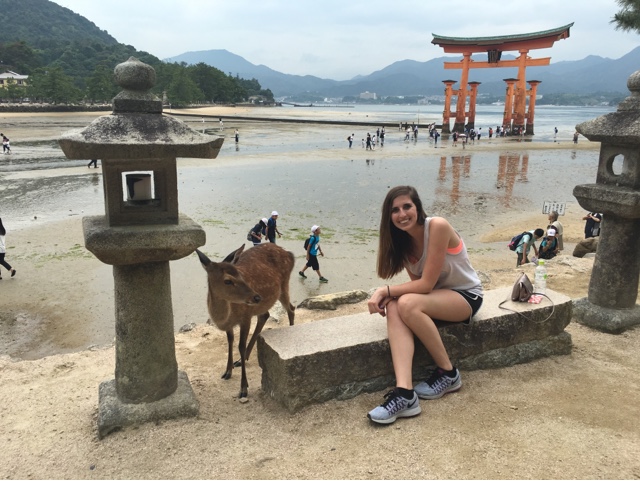 Miyajima is also known as Shrine Island. Since Hiroshima was a day trip for us, we didn’t get to spend enough time there. We finally found a possible lunch spot, but walked by to look for another. Then we could never find the first one. We ended up eating strawberry ices. Yeah, still not real food but refreshing. And we had to hurry back to make our train. We had three more hours of train rides before we got back to our hotel. 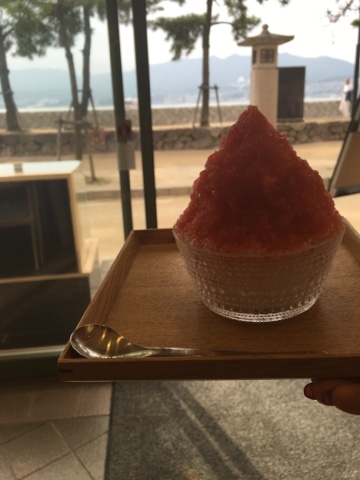 When we arrived back to the station in Kyoto, Maggie stopped dead in her tracks as she rounded a corner. MCDONALD’S!!!!!! OK….it was 8 p.m. and she hadn’t eaten a real meal all day. She had already decided on Pizza Hut, but that was an additional two blocks from our hotel. It was dinner time. 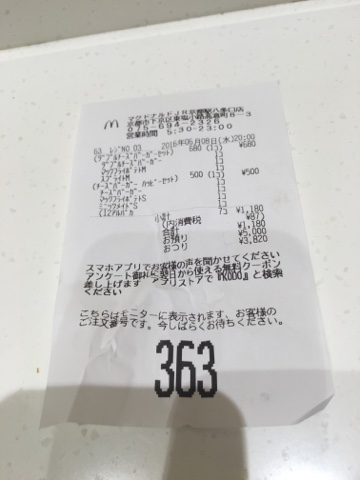 We made our way through the two additional subway stops to our hotel, exhausted but happy. While it had a few difficult moments, overall it was a fun and meaningful day.

Today we head back to Tokyo. We wished we could stay in Kyoto (and this beautiful hotel) longer. But there is never time to explore enough and we want to spend more time with Maggie’s friends over the weekend. The taste we got was wonderful and we would love to come back and see more.
We’ll do today slow. Our goal is to get to our next hotel room in Tokyo, which will be much smaller than this one from what I can tell. We don’t have to check out of our Kyoto hotel until noon, so I will let Maggie sleep as long as she needs and we will try out the buffet breakfast in the hotel and eat our fill before we set out. I will not starve her again today! 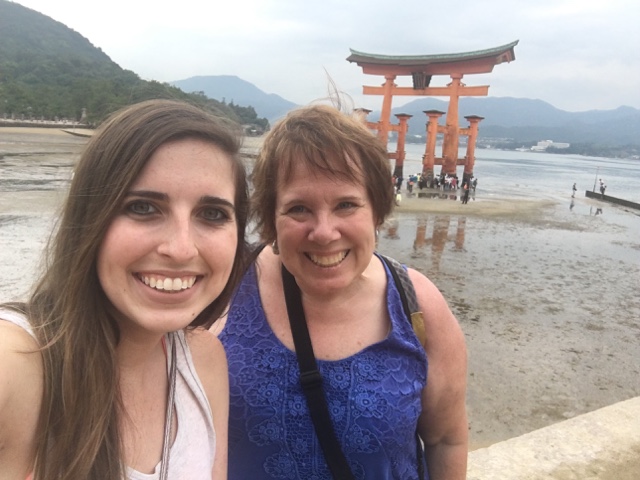