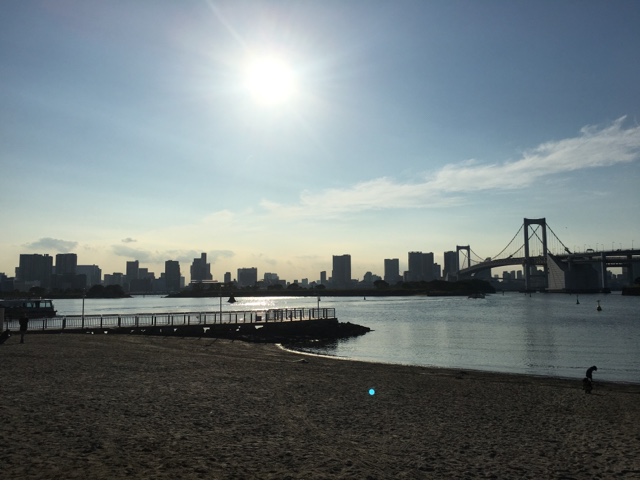 We’ve got an issue with our hotel room, Remember real estate in Tokyo is expensive, so budget hotel rooms are tiny. That in itself is OK, but we spoiled American princesses like our air conditioning! It’s not that we don’t have air conditioning in our room….we have it set as low as it will go, and the fan (separate) set as high as possible. But the bed is against the wall and while the person in the edge of the bed us comfortable, the one against the wall gets no air.
About 12:30 I woke up miserable. I tried to turn the air down more, difficult when controls are in Japanese and you can’t see them in the dark and you are trying not to wake up your roommate. Maggie heard me roaming and asked what the problem was. When I told her, she graciously traded places with me. I fell right to sleep, but unfortunately my niece experienced my prior fate. She said she slept, but sweat all night.
About 7ish I needed coffee. Not being in the princess hotel anymore, only green tea was available….which would do in a pinch, but there is a coffee shop attached to our hotel, so I decided to go there. Maggie decided she would go with me to check out the breakfast options. We weren’t very excited about anything that was at the cafe, so Maggie had the idea of going to…..McDonald’s. (Surprise!) We walked down the street, stopping along the way to see if any other options moved us. Maggie got pancakes and a hash brown, I got an Egg McMuffin (removing the Canadian bacon, though it actually looked thinner than what we have at home) and coffee. I also decided to try a Japanese doughnut from the 7/11 we had checked out. We brought it all back to our room and ate on the bed, picnic style. The doughnut….well, it was OK, but seemed to have been made with a lot of shortening. The little bit of chocolate that part of it had been dipped in was good. Still…. not good enough to require a repeat performance.

We met Maggie’s friend Tosh around noon. He’s another friend she met in Chapel Hill….she and a friend went up to him in the student union when they saw him sitting alone and started talking to him. He’s finishing up at his university here in Tokyo and will graduate as a business major next March. He’s contemplating some exciting options. He skipped class for us that day….I think we were worth it! 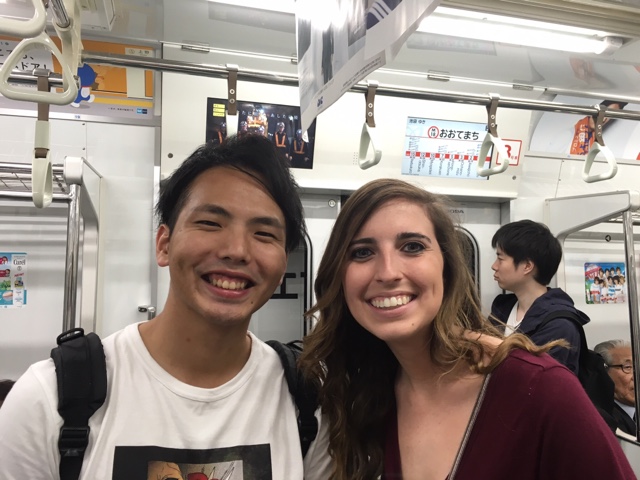 Tosh sent us several ideas of things to do the night before and I will admit I got unreasonably excited about one of them…a visit to Ryugoku…..sumo town! I don’t know when and why I got interested in sumo wrestling, but I do remember watching it on TV when I was visiting the Bradys when they lived in Okinawa. We traveled by subway and got out on the street. One of the first places we came to was the sumo museum. We walked around and looked at the pictures and the trophies of past (and current, I guess?) champions. It was fun to talk to people around there.,..they knew all about all of them and would tell us a bit of their story. I found out later that most of Japan knows these guys. They are the Michael Jordans or Dale Juniors of their world. I think perhaps their wrestling uniforms could be re-designed to better enhance their bodies (Think bikini bottoms with extra garters.  Sara, a project for you?)  But their robes are magnificent and what they wore around “the neighborhood.”

We asked about seeing them practice (several training facilities are in the area.) I, of course, had read up on it a bit (Google!) and found that you sometimes could watch by filling out an application the day prior and having a Japanese speaker with you. We had Tosh, so he asked around to see if there was any possibility of us seeing them. We found out practice is over by 8 a.m. Ummmmm…..won’t be happening on this trip.
But walking down the road we saw a couple of sumo guys and Tosh asked if they would pose with us. Maggie and I laughed later because being the Southern women we are we are used to people squeezing in close for the shot. Not these guys. I think perhaps they thought we were crazy American women. They are quite serious and kept their distance. But we got our picture. Day made. We hear it is a rare occurrence that many Japanese would like to have. 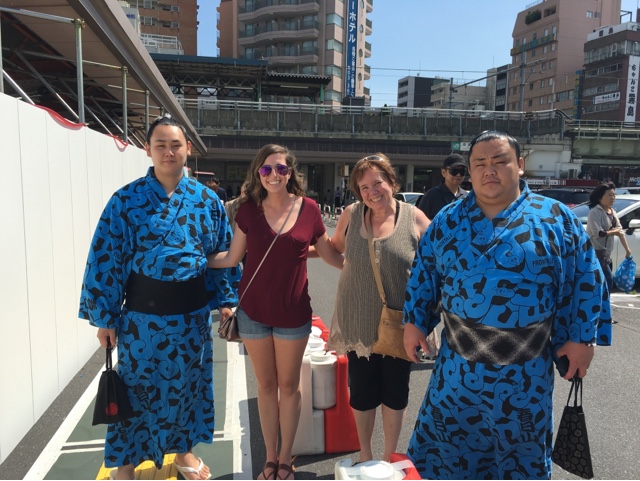 We grabbed lunch after that……ramen! So very good. We had the basic stuff, with pork and seaweed for me and Tosh, Maggie opted for no seaweed and they complied. But she ate it and loved it…..yea! We finally found a Japanese main dish that Maggie loves! Second score for the day. Plus she’s getting better with chopsticks! 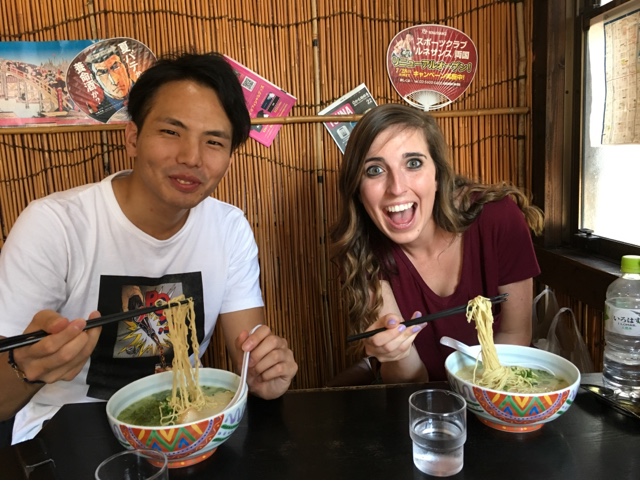 We the went to Odaiba….where we saw the Rainbow Bridge, the ‘”Statue of Liberty”, and the big Ferris Wheel from a distance (so pretty….didn’t look like it was in motion yet). We walked through the shops and other attractions there. This is a man-made island that has had its issues in its history, but seems to be thriving now. 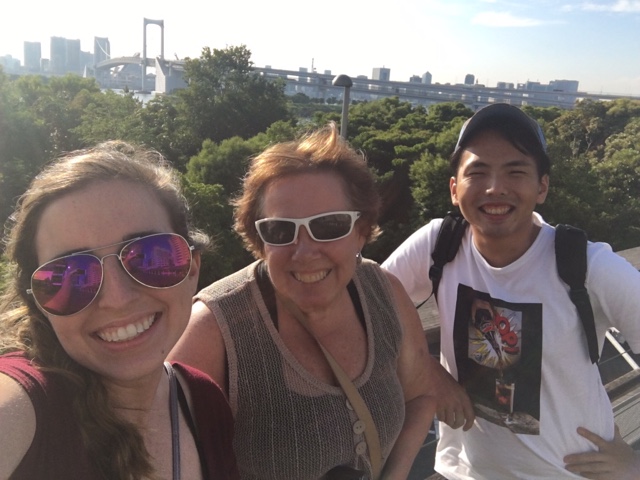 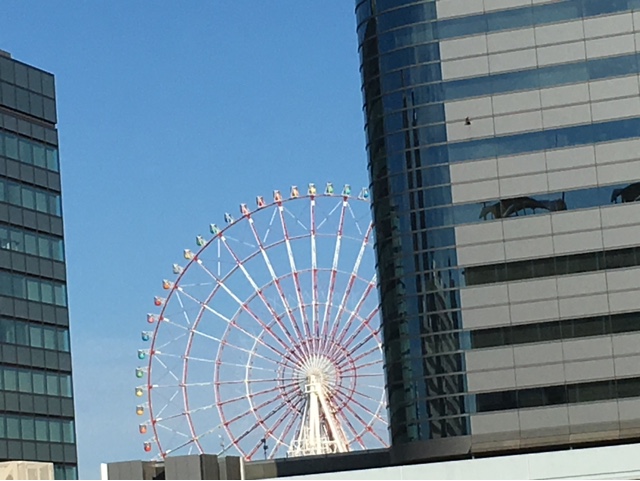 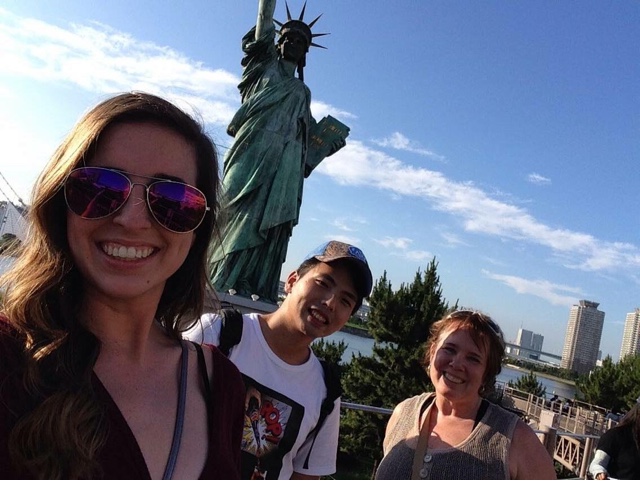 We decided we needed ice cream, and instead of the fancy crepe place we saw, we opted for “31 Flavors”, as Tosh called it. Yep, Baskin Robbins! Some similar flavors to home, but several unique. Maggie and I are usually fans of chocolate of some variety, but the guy working there gave us an unsolicited sample of something called Candy Box and Tosh and I chose that. It was a combination of a lot of things, but fruity (mango? lemon? orange?) and refreshing. Maggie chose ice cream with gummy bears. We sat outside and enjoyed these a breeze as we ate. 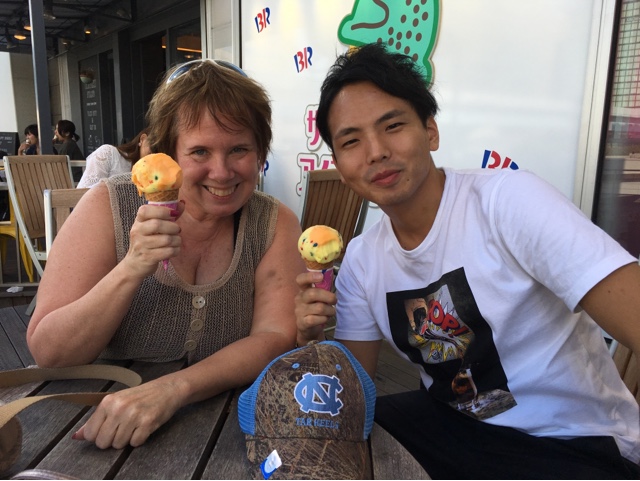 Tosh had plans for the evening, but Yuka had contacted us all and she was available for dinner. We travel about 50 minutes away by various trains to meet her. Tosh came with us the whole way and delivered us right to her (they know each other from being in Chapel Hill at the same time.) we got to experience rush hour on the metro. The crowd itself was OK to me, but at one stop I am standing with my back to the door where people are entering, holding onto my strap, when I feel a tackle from behind. This tiny Japanese woman had evidently wanted to make sure there was room for her. I think maybe we should recruit her for the Panthers.

Yuka gives us the good news that her husband Yasu will be joining us for dinner. She gives us two options. The first are those savory pancakes I have been wanting to try, the second a sandwich shop that is more American and Maggie’s style. We choose the pancakes (thanks Maggie) and head over, but it is very busy. Being a small place, it was not a good option.
We head to the second place she mentioned. It’s actually a very cool sandwich shop, bakery, and pizzeria. There is a wait there, too, but not a long one (it is Friday night.) We sip drinks….I was drinking water, but try a sip of Yuka’s rhubarb soda, which is delicious. We are seated and Maggie and I decide to share a small cheese pizza. The waitress delivers it with a jar of honey she recommends. We try it, doubting her, and it is fantastic! Who would have thought? Yuka and Yasu order several salads for our table. I had been eying them when we waited. They were delicious….my favorites being a carrot salad that was served with several other salads (white beans, roasted veggies), and the other was what they called a cucumber salad….more like our regular tossed salad. 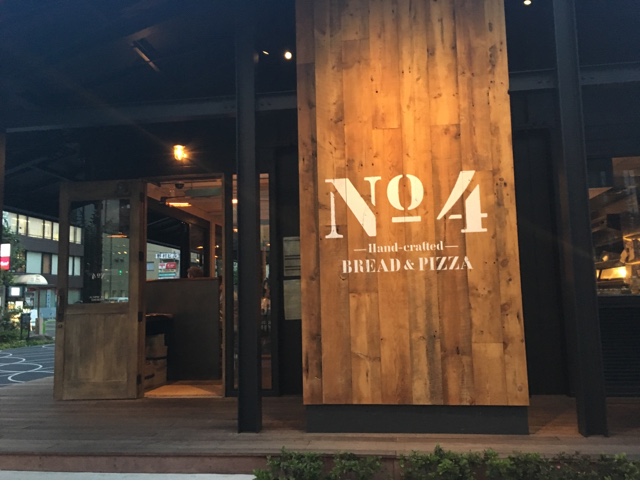 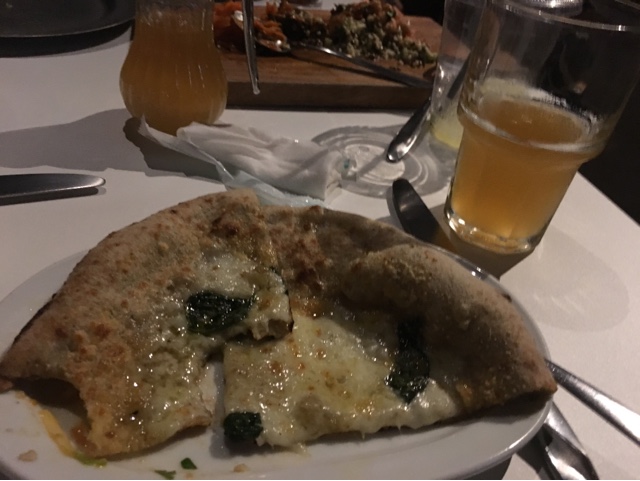 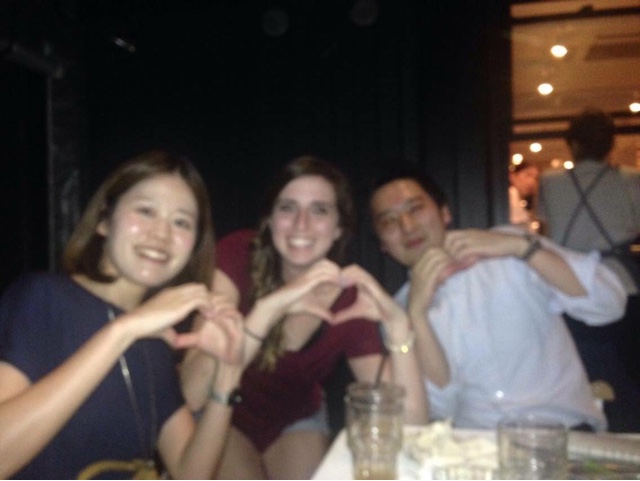 After dinner we walked through the streets talking with our friends and they took us almost the whole way back to the hotel on the subway. We’re getting quite efficient on the subways, but it is so nice to have to think! Yasu and I were talking and Maggie and Yuka. Yasu told me how me how grateful they were for Maggie becoming friends with Yuka in this English conversation group. He said Yuka’s English had improved considerably since meeting her. It must be difficult to live in a place where you only have a limited comprehension of the language….it truly is a nice gift. College students and those who live near college towns, consider doing this. (I was also involved with such a program when in Chaoel Hill, but only for one semester.) Yuka and Yasu plan a trip back to the U.S. next year and want to visit NC during that time. Chapel Hill of course, but they have said they would love to visit Statesville. We can’t wait for them to be our guests!

Yasu told me that before the went to the US for grad school he had never driven, but they rented a car and toured around the country for 30 days, going as far as California. He said it was hard, especially since cars in Japan travel on the other side of the road! But it helped them see a lot of the country.
Oh, and some creepy older guy tried to pick Maggie up when we were getting back to our hotel. He started by chitchatting in English, then asked if she would spend some time with him. I stared him down with a very loud and firm “No!” He got the message and left. (His friend watched from a distance and laughed!)  Maggie could have handled him on her own….but I wanted him to get the “You are a creep” message.
Today we meet Maggie’s friend Sachi. I have no clue what is in store, but we are excited to find out! 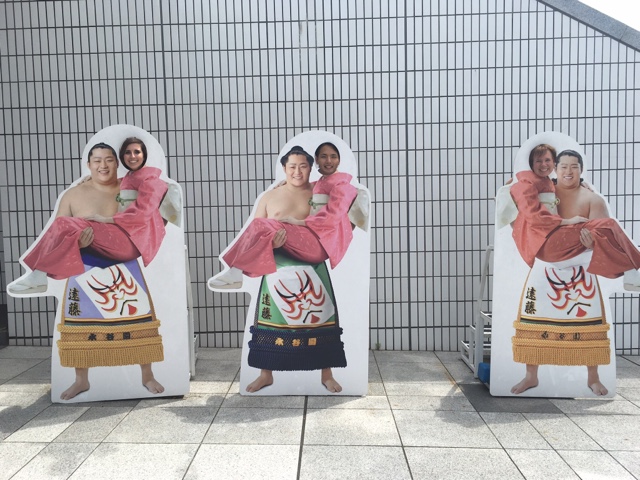