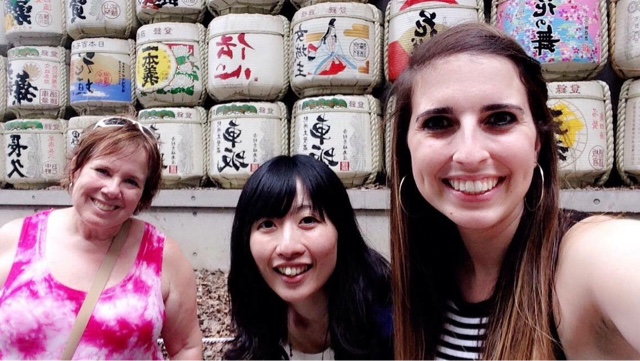 We began our Saturday eating

these incredible chocolate cream filled doughnuts that Yuka sent home with us on Friday night. Oh my word, they were delicious! I broke out the tea maker and had a cup of green tea with it. I hate having to go out for coffee (I miss the Nexpresso maker!) Maggie should go and get her elderly aunt coffee in the morning, shouldn’t she? 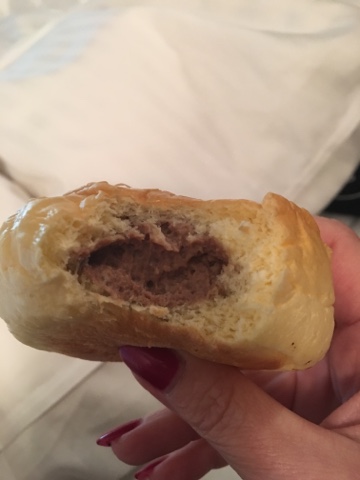 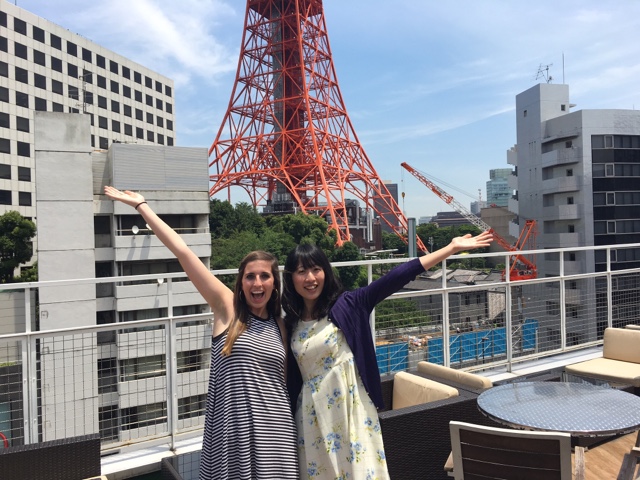 We met Maggie’s friend Sachi at the Subway (sandwich shop) at the subway station near our hotel and headed out to lunch. Sachi and Maggie met in the International Friends group that Maggie was involved in at UNC during her junior year (the same group that Maggie met Yuka in). Maggie has loved Japanese people since meeting Shino in 4th grade, so she always chose Japanese partners (they would meet for the international students to practice their English and learn about American culture). Sachi now works for IBM here in Tokyo.

We had no idea where we were headed, but she told us we were eating Italian. It turns out she chose the place because there was a direct view of the Tokyo Tower. It was my view throughout. One of those times you sit and think “Wow….,this is my real life!” 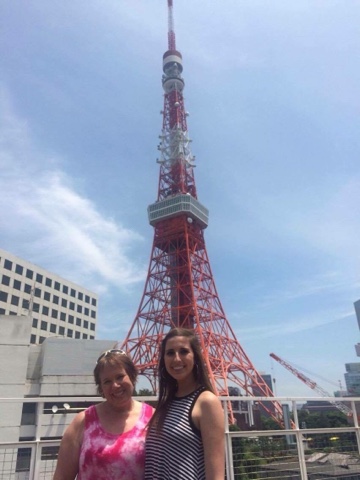 And the food was great at the restaurant! Maggie loved the bread. I was excited to get a great salad and some great risotto (I’d never had it with avocado.) There also was seafood pasta with red sauce. Yep….not typical Japanese….but fantastic food and an incredible view we can’t get in Statesville! 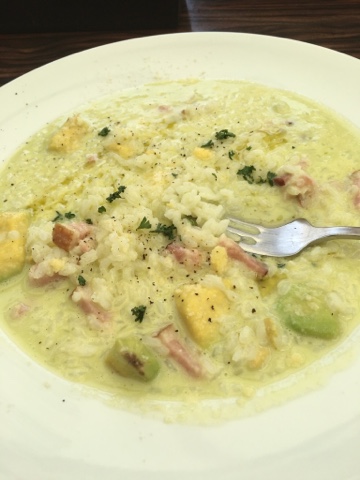 Meiji Shrine. It was pretty wild….you’re walking around a busy shopping district and cross the street and there is a lush forest. Lots more people than I would prefer (tons and tons), but still it is a nice place. This was evidently the day for weddings there…..we saw two groups taking pictures after weddings and saw a processional of another. Sachi said that these are the most traditional weddings in the temples….more modern girls have them in churches. It was definitely interesting to see. I do love weddings! 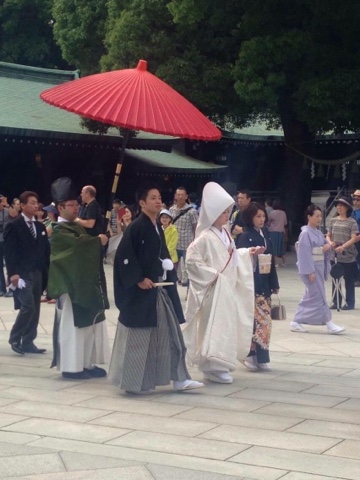 Then we headed back to Odaiba, where we had been the day before to see the Rainbow Bridge. We wanted to see it at night, so decided that would be the area where we would have dinner. In the subway we had a snack, though. A cream puff from a place called Beard Papa’s. Evidently it is tacky to watch on the subway, but we tried to be discreet. So OK….we were tacky NorthCarolina girls and brought Sachi down to our level. 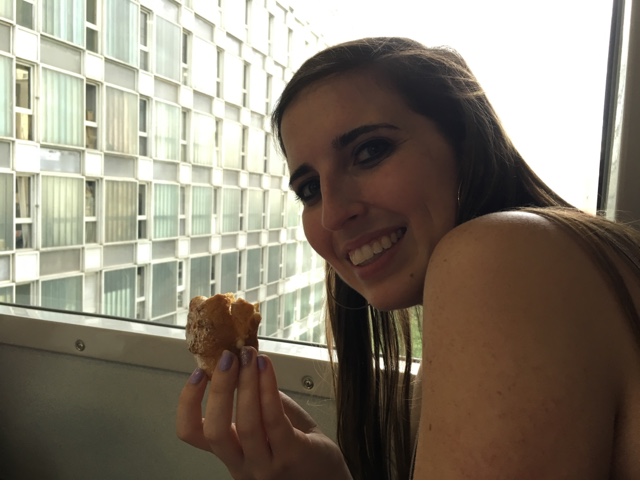 The next adventure was to visit the Tokyo Trick Art Museum. This is a mixture of pictures or scenes that are optical illusions and setups for some very funny photos. Just when you want your camera to work well, but both of mine had issues. My battery was dying in my phone and then the SD card in my camera was full. I was prepared with an extra one in my purse. Unfortunately there was an issue and it wouldn’t work. So very frustrating and occupied my mind for the rest of our time at this funny place. When we were leaving the girl working in the gift shop you pass through to exit said “Did you drop some yen?” I looked down and saw a 1,000 yen note there. For once I didn’t feel I had dropped anything, but reached down to hand it to her….it was another illusion. Painted on the floor. Made us laugh. She was deadpan. 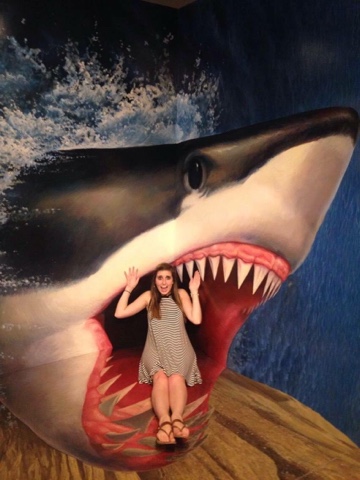 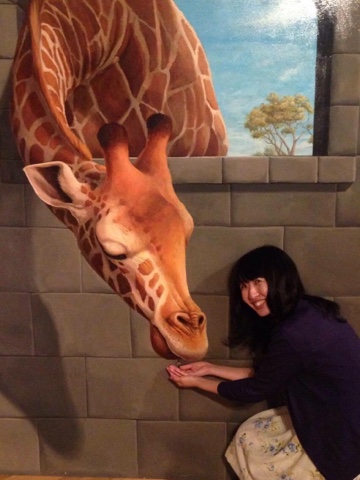 We watched sunset over the Rainbow Bridge, before going to dinner. We ate the oko

nomiyaki (or savory pancake) I had wanted to try. They cook these at your table on a small griddle that is in the center (some restaurants have you cook your own Sachi said.). We shared one of these (with cabbage and shrimp), a pork noodle dish, and an egg dish cooked with rice cakes and enjoyed all of them. Yep, even Maggie! I had a little sake with mine….it seemed time. 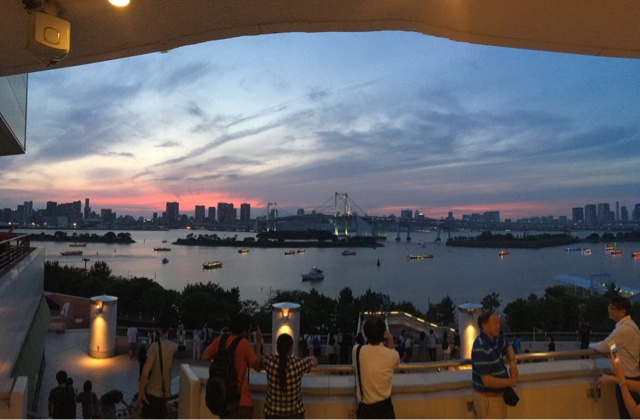 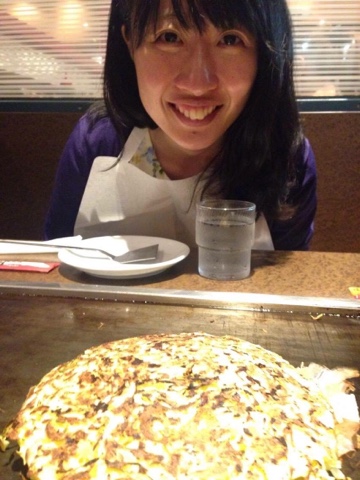 We ended our evening looking at the Rainbow Bridge and Tokyo Tower at night over the water. Incredibly beautiful. We tried to soak it all in. Then we had to take the subway “home”. It was so sad to say bye to Sashi. It was after 9 when we left her, and she still had work to do when she got home (she had started at  seven this morning….Saturday, remember!) And I thought I worked long hours! More sacrifices these sweethearts of people are making for us.
Tomorrow we’re on our own and think we may try to get extra value out of those rail passes and visit Mt. Fuji. Not to do the seven hour climb…our swollen feet can’t take it. We’re thinking about taking a picture or two from a nearby town. Since it is 12:30 now and we have been early to bed girls and still have had issues getting going in the morning, we’ll see how we do! The great thing is there is no pressure and no schedule. So many other alternatives for our last full day in Tokyo. 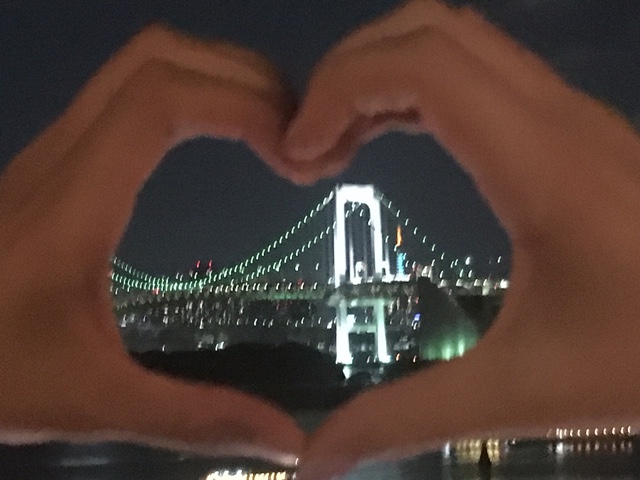