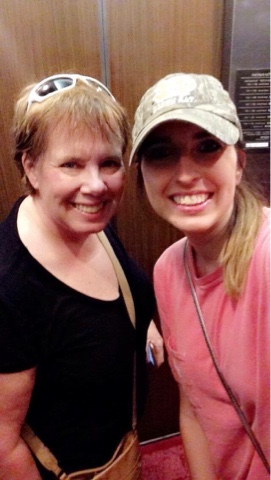 The day didn’t begin well. At some really crazy early time my phone’s alarm went off. It plays a song from my iPhone… I have no clue how it got there or what the name of it is. I figure it came from a niece or nephew downloading on my iTunes account years ago (before they had their own credit cards). Since it is not too obnoxious, I never bothered to take it off. Anyway, Maggie got up and turned the alarm off (I am sleeping next to the wall, so she was closer.) She went right back to sleep. I dozed a bit, but never fully went back to sleep. (So thanks to those who were Facebooking who provided entertainment.)

I was at that point where you are between sleep and awake, and the bed started rocking. In my drowsy state, I was startled and thought Maggie was having a seizure. No, Maggie has never had a seizure….there is no reason to think she would have a seizure…but yes, that was my first thought. And it would have been a bad one! When I saw she was OK, and I was a tad more awake, it occurred to me that we just may have experienced an earthquake, i waited a while and then I Googled….and yes, there had been one nearby. It was a 5.0 and hit the region of Ibaraki-ken Nambu, which is about 62 miles away from Tokyo. Reports for Tokyo were a 1 or 2….I couldn’t tell exactly where we were based on the names provided. But it was certainly an interesting start to our last full day in Tokyo.
Maggie was still sleeping, and I felt the need for coffee. I threw on clothes and ran down to the coffee shop next door. Ordering things like coffee can be a challenge here. You never totally know what you will get. I ended up with cream and brown sugar in mine. I usually don’t use sugar, but coffee here is often closer to expresso, so that seemed like the best option. Plus there wasn’t a “cream only” option for some reason and I wasn’t up for charades. It was a bit sweet for me, but really good. And caffeine…..glorious caffeine. But this was a large coffee…..a big issue with these folks. 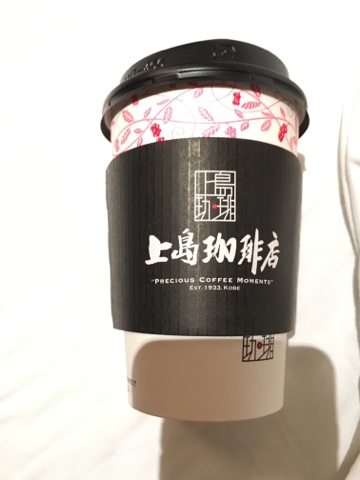 When Maggie woke up, we decided we had better get going. It was the last day of our Japan Rail Pass and we wanted to use it. We decided we would go somewhere where we could get pictures of Mount Fuji, since that was really the last thing on our list to see. We headed to the town Hakone, because my guidebook said that would be a good choice (as did Sachi.)

It’s the end of the trip. We’re tired. Maggie wasn’t feeling well. We didn’t have a well developed plan. It was hot and humid. Still, we figured we would have lunch, take our pictures, and go,
We didn’t see a visitor’s information center at the train station, so started walking around aimlessly. We first started to try to find some sort of sign or visitor’s info center that would tell us where to go. We never saw one, so head for higher vistas from which to see Mt, Fuji. Maggie got overheated and sat on the side of a bridge (much safer than it sounds!) as I explored  I found a couple of options for next steps, but a guy comes home near where Maggie was sitting and we think he told her we wouldn’t see it from there. (Maggie asks for directions immediately if she doesn’t know where she is going. I don’t.)
We head to look for a place to have lunch. We see an Italian cafe (they love Italian here), and the menu sounds good. We go in. The host/cashier was checking out a customer. Afterwards he tells us to wait a minute, goes into the kitchen that is right in front of us, and says about two sentences to the other guy in there. The guy responds. Guy comes back and tells is there is no room.  We saw open tables and a bar area with no one seated there. It was in the midst of lunch time. A Japanese couple that went in before us sat at a patio table outside, There were other tables out there. But OK….we know when we are not wanted. We left.
By that time I wasn’t feeling well either. We bought cold drinks at 7/11 (they love us there), and decided to just go back to the station and go “home”. First, though, Maggie stopped by Starbucks (yes, they had a Starbucks!) for the Baked Cheesecake Frappucino she had been seeing advertised around town. (She recommends it.) She perked up a bit with that….and the girl who made it drew a cute design in the cup. (So we’re stretching for pictures today!) 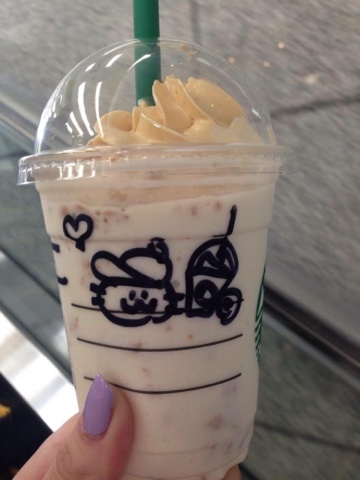 I get tickets for the train back and ask the guy to give us seats on the Mt. Fuji side. Did we see Mt. Fuji? Let’s say we did. There were mountains….and fog…and the train goes fast and puts obstacles in your view. And we were probably so overcome with the beauty we didn’t get “the” picture. But here are some kinda bad mountain pics taken on the train. 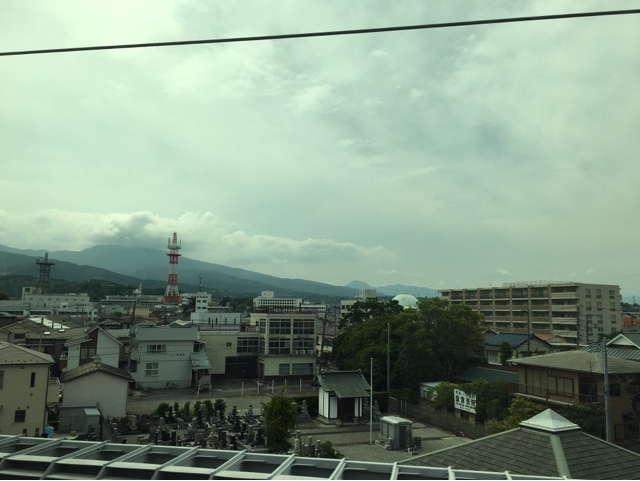 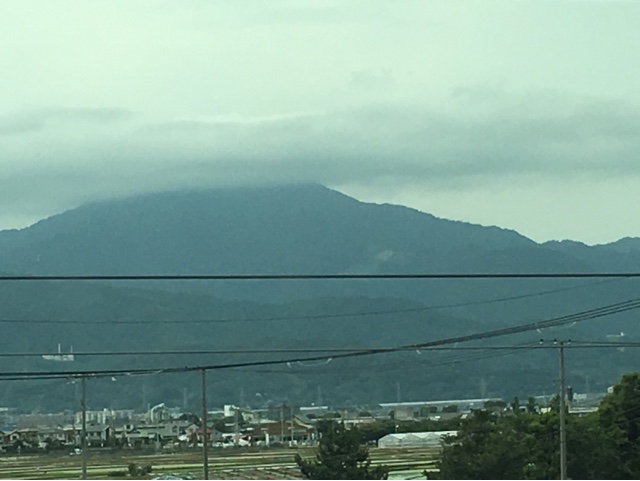 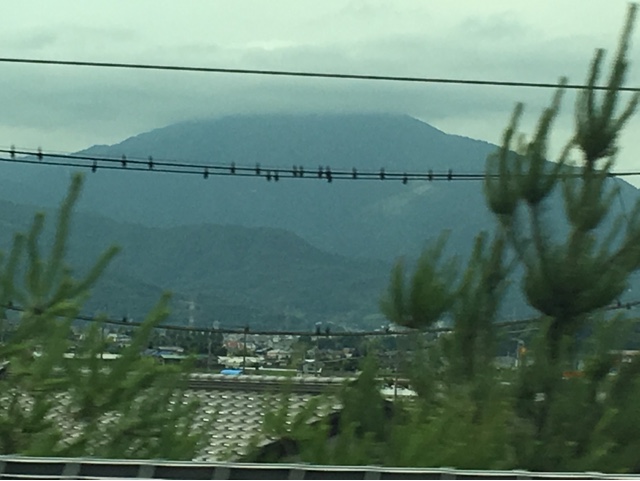 (By the way…as we went to find the gate to go back to Tokyo we find the visitor’s information center ion the floor above where we had been. By that time we were over it, so just passed it by. Yes….I am sure we missed out on a great experience. We really didn’t care. Next trip!)

We love riding the Shinkansen (bullet train), so didn’t mind that being the bulk of our tine away for the day,  It is very relaxing and you do get to see some interesting scenery. Even the small towns seem large. I had struggled over whether to buy the JR Rail Passes (they are for tourists only and you have to buy the voucher for them before you leave home and redeem when you get to the country…and they are expensive). I bought the 7-day passes and they were perfect, We got our money’s worth out of them. Transportation is expensive in Japan. My estimate with train tickets and subway fares and the few taxis we took, it will have cost at least $800 before it is all over. And we did things as cheaply as possible. But we did move around a lot!
When we got back into our area of town, it was well past lunch time and we hadn’t eaten much breakfast, so we were ready for food, OK….we confess. We ate at Burger King. Yeah, so I have broken my food rules often this trip, but we ate mostly Japanese food throughout and Maggie tried everything.I think we compromised well. At Burger King we avoided the more economical pork sandwiches that were offered and just got hamburgers. Burger King was far more pricey than McDonald’s, in case you’re wondering. That was our main meal for the day. Sad, but it happens.
The rest of the day we didn’t do much. We’re laughing a lot. Everything seems funny. A conversation with Maggie and her dad, my brother Scott, had us in hysterics. The connection kept getting dropped (when Maggie was in the middle of a story and when reconnected Maggie would stump him with “So what did you hear last?” (There is not the best wifi in Japan, which surprised me. Well, it may be a slight upgrade from U.S. hotels and far better than most airports…..but I had anticipated awesome.) Maggie has persisted and kept in touch with her parents by calling online, even with lots of dropped calls.
We’re at that lethargic “end of the trip” time when the energy is drained so we just want to get it done. We are mostly dreading the trip tomorrow from the hotel to the airport with all of our luggage. I say you must carry everything you bring, one of my travel rules, but we are paying for our choices. It is tough. Up and down millions of subway steps, going from one subway line to the next (there are four companies in Tokyo alone.). But we can do it. Once we check our big bags at the airport we will be good. We will leave in 12-13 hours to start the trek to the airport (3 subway rides, one a very long one) and will go through Vancouver and Toronto and be home on Tuesday morning. We gain time going home, so that part is good. But still, I expect two very tired women to hit Charlotte Tuesday around 10:30. 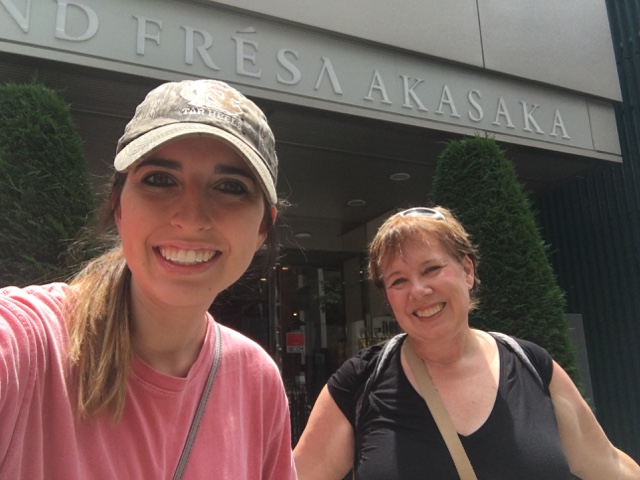