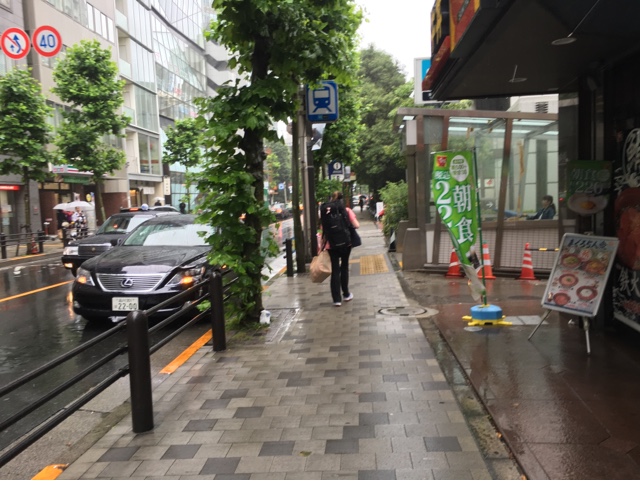 While we loved our time in Japan, Maggie and I agreed that we were not upset about going home. When you like your life, it makes it easier to accept the trip is almost over….and we are tired! 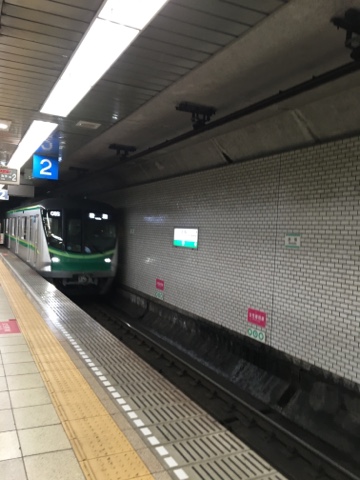 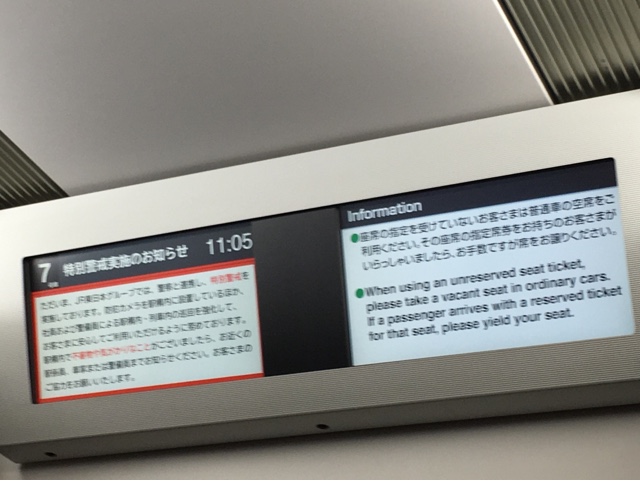 Besides the time factor, add into it things like carrying your luggage, all of your luggage, on two subways and then a train to get to the airport, and then you have to find the right spot to check in at that airport and dump the checked luggage. I’m used to these things, but they are very foreign to Maggie so there are times she hasn’t liked me very much as we have done them. Layovers are a pain….having to wait all day in the Vancouver airport to catch a flight at 11;30 tonight? Not fun. Then to have to travel to Toronto, have a short layover, and then go to Charlotte, where we will go through customs yet again? Like I said, grueling. We checked out the day rates for the airport hotel in Vancouver..$342 for a 6-hour stay. Yep, really. That’s “only” about $267 U.S….but still. $45 an hour. No. But I hear it is very nice!

Narita Airport in Tokyo is huge. We found entertainment as we left the area where we deposited our luggage. I’m not quite sure what it was….but it was loud. And it got the attention of this cute kimono-clad little girl. 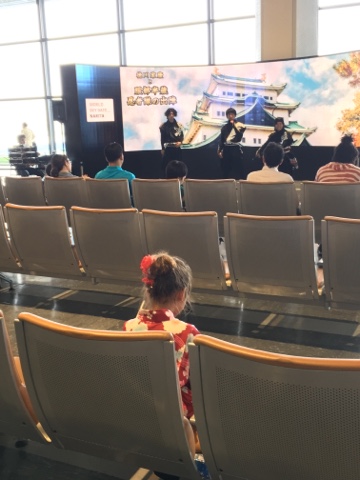 We got interviewed by a Japanese TV crew as we were finding our way to the gates. It was fun. They would ask us questions in Japanese, then in English. They wanted to know where we had been and why we had been there. Then they wanted to see our favorite vacation picture. I showed them the one with the sumo wrestlers. They seemed a bit surprised to see it. I guess what our Japanese friends told us is true…not many people get their pictures taken with sumo wrestlers.
Maggie showed them one of her selfies with the deer at  Miyajima on the day we had gone to Hiroshima. She told them that was the closest she had been to deer when they hadn’t been stuffed and on a wall! That photo was an especially funny memory for me. Maggie saw the crowd of deer and started taking selfies. She didn’t notice the guy whose lunch bag they had attacked…and him and his friends trying to rescue it. 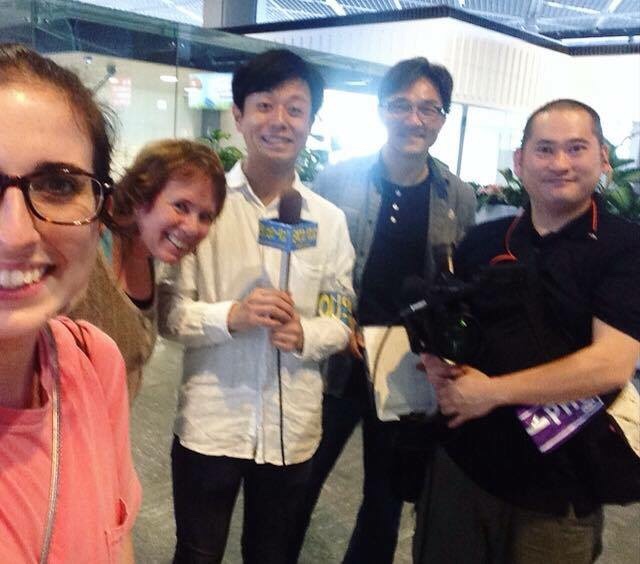 There was even unintentional entertainment at the airport. Things like this bathroom sign cracked us up. I guess they don’t want you to get confused with the squat and regular toilets. They had both. 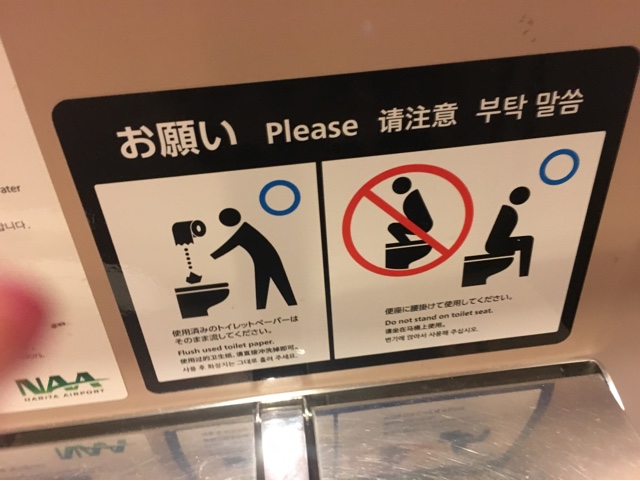 The airline upgraded us to the emergency row, so we got a bit of extra legroom. That’s nice on a long flight. The flight itself was uneventful. The food was awful. I’m not a fan of airplane meals. Luckily I don’t want much food when I travel. Flight time was 9-10 hours, but the time passed quickly. I slept 4-5 hours on the plane. Maggie only slept one. She was busy watching movies. We were both surprised when we saw our flight was almost over.
We could do a tour in Vancouver or go to their outlet mall if we had the energy. We don’t. Maggie curled up between two seats (more like a couch, really) when we got in and slept for a few hours. She’s awake now, watching a movie and charging her phone. I expect she will sleep some more. We do have wifi, which works well. I wish all airports had it! But there aren’t enough outlets in these comfy areas so you can keep your devices charged. I am sharing with a guy who grabbed the one I had been stalking before I could get to it. Maggie has gone to one of the cafes.
If you have to hang out in an airport, the scenery around this one is pretty spectacular. The airport is also well equipped and has some decent food options. It could definitely be worse. 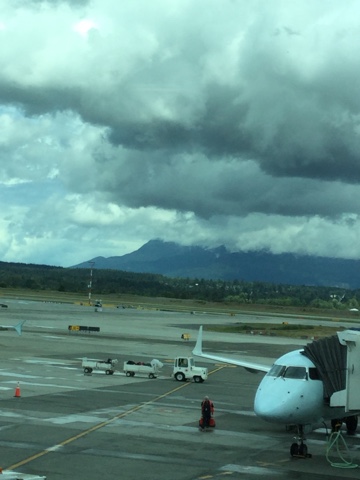 But we just want to be home. We will be two happy women midday tomorrow. It has been a great trip, though, and we have great memories for a lifetime. But home is a good place to be….until the next adventure. 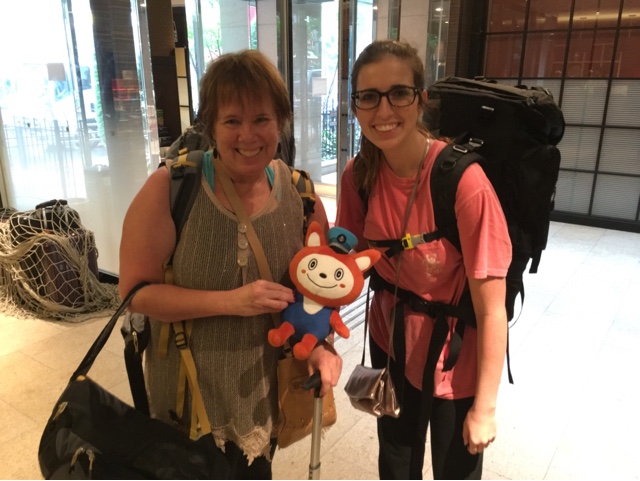