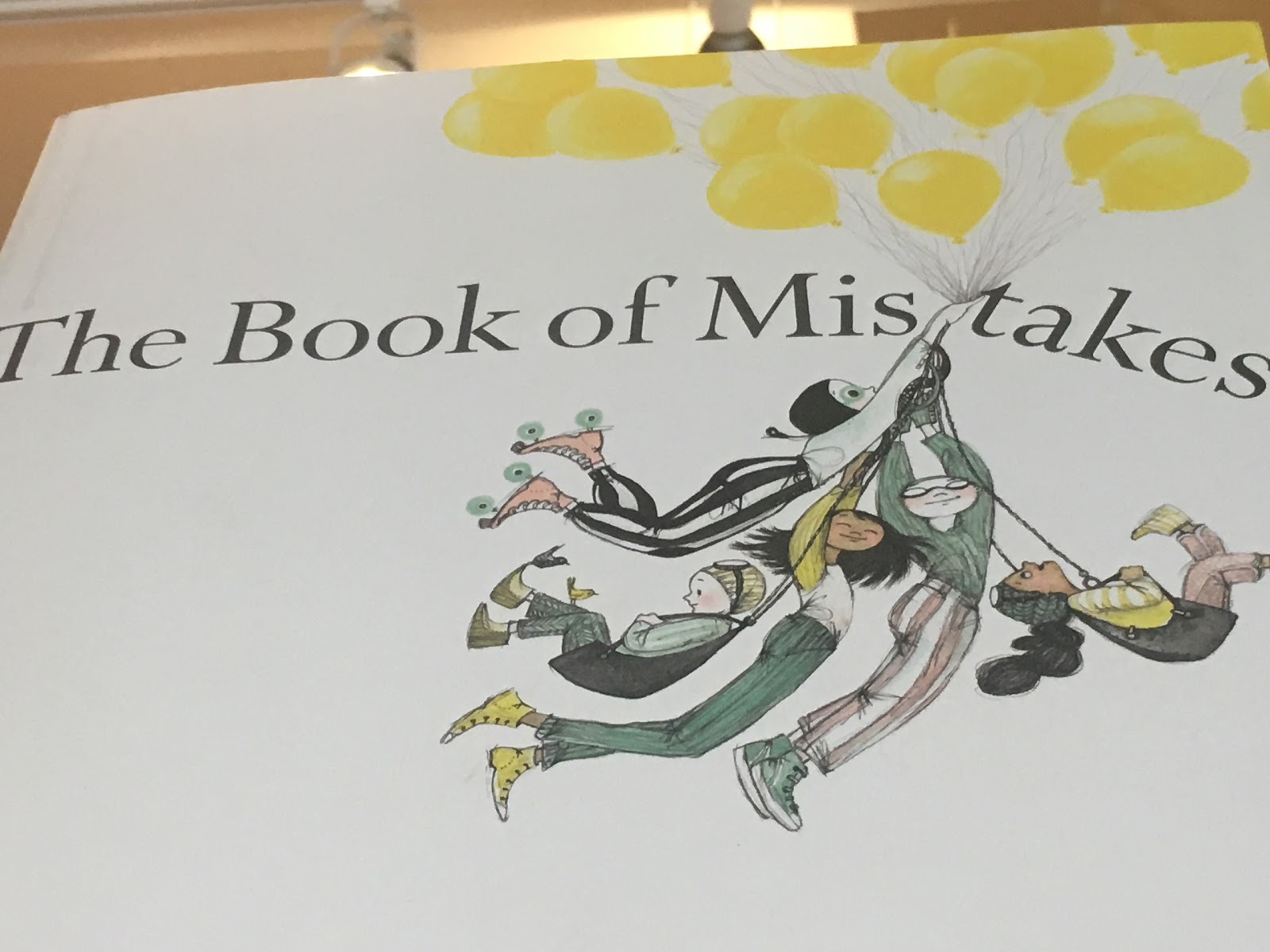 A mistake should be your teacher, not your attacker. A mistake is a lesson, not a loss. It is a temporary, necessary detour, not a dead end.”  –   Anonymous
“You build on failure. You use it as a stepping stone. Close the door on the past. You don’t try to forget the mistakes, but you don’t dwell on it. You don’t let it have any of your energy, or any of your time, or any of your space.” – Johnny Cash
“Never say, ‘oops’. Always say, ‘Ah, interesting’.” – Anonymous

As my friend Heather and I were tooling around Malaprops bookstore in downtown Asheville, the cover to this book caught my eye. I snapped a picture. I didn’t pick it up, didn’t rifle through the pages as I often do when a book catches my eye. It just made me think……how thick would my book of mistakes be?

I don’t seem to dwell on mistakes as much now as I used to. I used to let even the most minor error keep me tied up in knots for ages. As an analytic personality, I’d want to dissect it up and down. Why did I do it, say it, think it, forget it, or simply screw it all up? Do you know many angles from which  you can dissect something? It’s infinite. When you are finished with the things from your point of view, them you start obsessing over the people impacted, or who may have been impacted. What do they think, will this change how they see me, am I a dork, idiot, or horrible person?

We’re often presented to a tough jury. Some would rather you serve a life sentence for the mildest infraction. Or the death penalty…..you are dead to them and they want you to be dead to everyone else. Often that jury is simply yourself….and you seem to berate yourself as though with the internal voices of twelve angry jurors. Oh…and any lawyers and judges that happen to be in the vicinity. We need to remember that often the jury is wrong, or prejudiced. And sometimes they are right….and compassionate.

So many people live in complete fear that people, or God, will find out their mistakes. They try to hide from them completely. It reminds me of Jonah as he tried to hide from God. Quite silly to think God couldn’t find him….especially since he was never out of his sight. But Jonah tried. And Jonah felt sorry for himself. And Jonah mourned everything and was obsessed with himself. He actually was both whiny and useless at a time when he could have been doing good things. Jonah wasted time.

I don’t think we should forget our mistakes. We should deal with them appropriately. Was someone else impacted? We should apologize. Is there a lesson we can learn? We should figure it out and learn it. We should change when necessary, or adjust whatever needs tweaking going forward. The past can’t be changed. But we can be better as a result of what we learned there.

While I don’t believe you need to confess every little thing that you do to everyone you meet (because truly we don’t want to hear), sometimes you need to talk it through. Sometimes saying it out loud allows you to figure things out for yourself. Sometimes there is someone with knowledge that can help you sort it out or figure out how to keep it from happening again, if only you tell them the truth of what happened. That’s why we are here…surrounded by others…..to learn and share what we learn. Yeah, it takes a certain amount of bravery to live transparently. But it’s also a big burden lifted.

Truth is, we know you are not perfect. And those times you pretend to be? It’s wasted effort. There will always be someone who sees the real you…..and who will be shaking their head at your denial. Especially with today’s technology. One way to keep clean….imagine you are on camera at all times. You just may be. And anyway…like Jonah, you’re not fooling God. He can see you hiding behind that plant.

This morning I was sitting at a stop light and got distracted thinking about needing to run by the bank  to get some cash out of the machine. I glanced at my purse and reached for my wallet, preparing to grab my card in my wallet. The light turned green, the person in the white SUV behind me honked. I was momentarily startled and embarrassed, but went on my way. I didn’t give it another thought (I may have hit myself in the head, reminding me to pay attention.). I pulled into the bank (probably a mile further down the road) and stuck my card in the cash machine. A white SUV pulled up in the next lane, which made me pause because there was no bank machine there. The lady rolled down her window and said “I am so sorry for honking at you back there.” It confused me for a minute, then I remembered. “There is no reason to apologize,” I told her, “I was the one who had gotten distracted. Thank you for getting my attention.” She apologized again (lol) and went on to park in the lot near the bank. It made me smile. She worried about something she handled appropriately. Maybe it was not guilt but fear she would be a victim of my road rage (I don’t have it often…and I don’t think that was the case). I, the one who actually made the mistake, was already on to the next thing…..though admittedly more focused on my task at hand (driving) than I had been before because of her little reprimand. She, however, worried needlessly. She did nothing wrong. But still she felt more guilt than the true transgressor.

My book of mistakes would be quite thick, but you probably won’t get a chance to read the special unabridged edition. I’ve forgotten a lot. There are others I need to forget, a few others I need to work through. But I’d rather get through the guilt stage and focus on the lessons learned….and live a better  life without toting that extra weight around. It’s a beautiful world when you allow yourself to see it.