“Nations, like stars, are entitled to eclipse. All is well, provided the light returns and the eclipse does not become endless night. Dawn and resurrection are synonymous. The reappearance of the light is the same as the survival of the soul.”  Victor Hugo

“We should always endeavor to wonder at the permanent thing, not at the mere exception. We should be startled by the sun, and not by the eclipse. We should wonder less at the earthquake, and wonder more at the earth.” Gilbert K. Chesterton

“When we have God in clear focus, His powerful presence eclipses our fear.” Chuck Swindoll 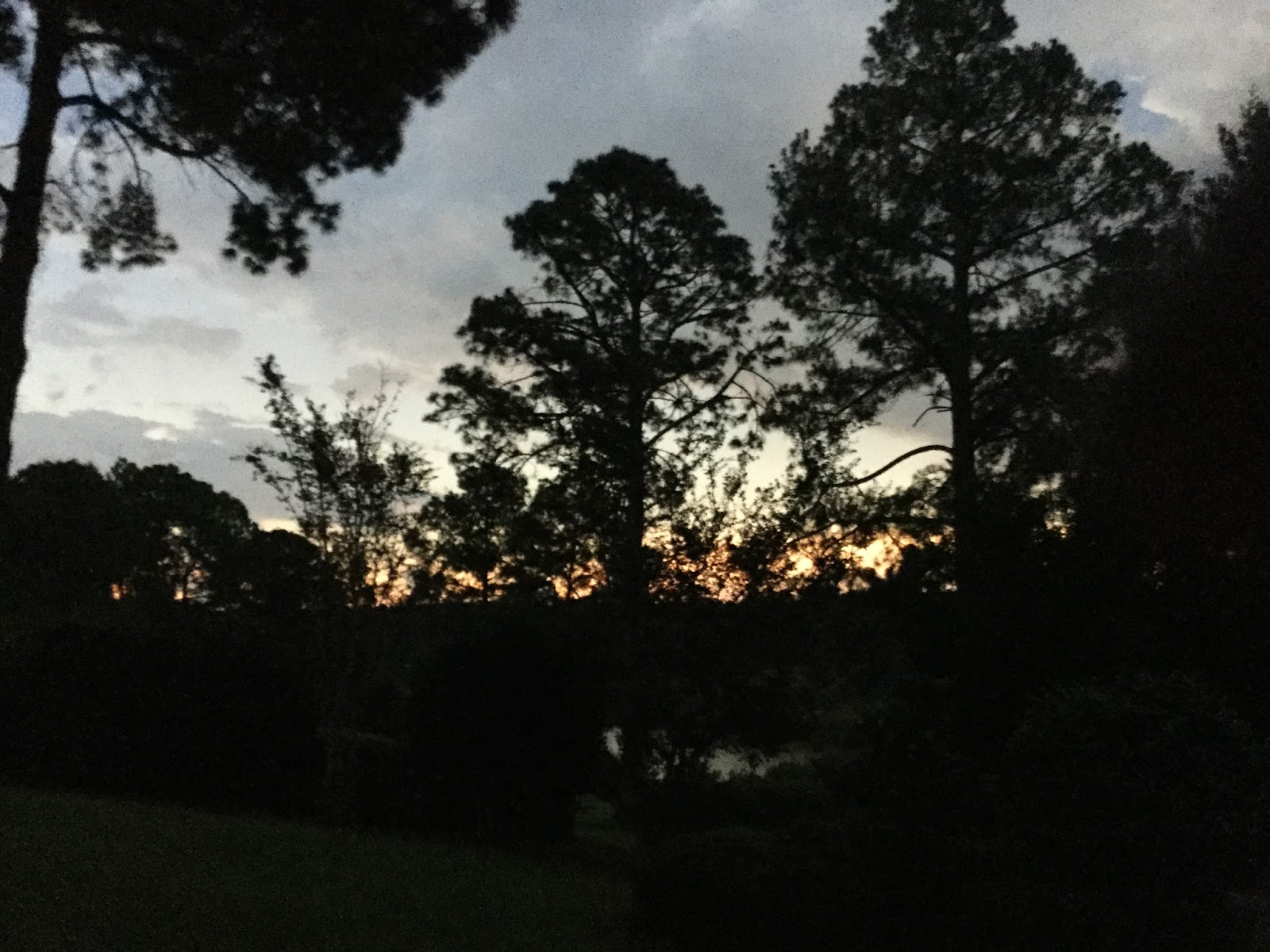 The only memory I had of the eclipse that was in 1970 was in the preparation. I remembered the pinholes in the shoe boxes, the warnings not  to look at the sun without them, and the general feeling of excitement and fear (“Don’t look at the sun!”). That’s about it. I have no recollection whatsoever of seeing the eclipse. Maybe some of you that knew me during that time will tell me if I did. Regardless, it didn’t make much of a lasting impression. My guess is that I was underwhelmed.

So why did I decide to not only view it, but go to see it at totality in Columbia, SC, with my friend Jan? Well, beyond the fact that Jan is fun to hang out with and we were overdo a visit, I have no clue. Luckily I can work from anywhere, so I just prepared to work at Jan’s house that day. It seemed to make sense because I had to be in Atlanta for a meeting the next day, and from Columbia that’s only about a 3 1/2 hour drive. I hate flying to Atlanta for day trips and I figured the airports would be full of people who were headed home, so driving seemed the more peaceful route. Yes, I knew traffic to Atlanta may be worse than normal, but I was prepared for that. I thought.

Astronomy was one of my least favorite classes at UNC. I loved the lectures of my cute Dutch professor, but hated all of the parts of the class others would consider “fun.” My TA for observatory and I hated each other from Day 1….right after I asked him how you really figure out what direction North is. Yes, I knew the North Star (his answer) and could figure that out….but I though there was more. There had to be….you can’t always see the North Star. I still don’t get it. I thought if I could unravel the mystery of North-South-East-West, it would be a college coup for me. The TA snapped at me to point my telescope in the same direction as everyone else, and then I knew he wasn’t one of my people. No coup would occur.

I did not stay awake for one of our weekly planetarium sessions. People pay money for the experience. The voice of the guy who led them was amazing….but monotone and soothing. After about the first few sentences, I was taking a nap. Every single class. Planetariums still have this effect on me.

But still…..part of me is fascinated by it all. I used to date a guy who loved astronomy, and I enjoyed stargazing with him and listening to him talk about it all. He didn’t rid me of the astronomy hatred completely, but it was fun to see things through his eyes. A couple of years ago I attended a planetarium show and actually stayed awake for the whole thing. I was shocked by myself….though I still see it as a fluke.

But then there is the sheer beauty of the heavens. When my great nephew Kaelan died last year, my niece Sara asked people to take photos of the sky. Ever since I have found myself captivated by it. And comforted by it. I’m constantly shooting pictures of it. It reminds me that God has a really good view of things….and is in control of it all….and is quite the artist.

As the early moments of the eclipse started we threw blankets on the ground in Jan’s beautiful back yard. I was hoping for quiet, and was so pleased when it was. We could hear some occasional chatter of the neighbors, but not much. As we laid there with our glasses on (that we tested out on the sun even before anything started), we were comparing notes. We saw different things. It was weird and fascinating. Jan attributed it to her cataracts, but it made me wonder how many things factored into it. How different is the view of the world for each of us? 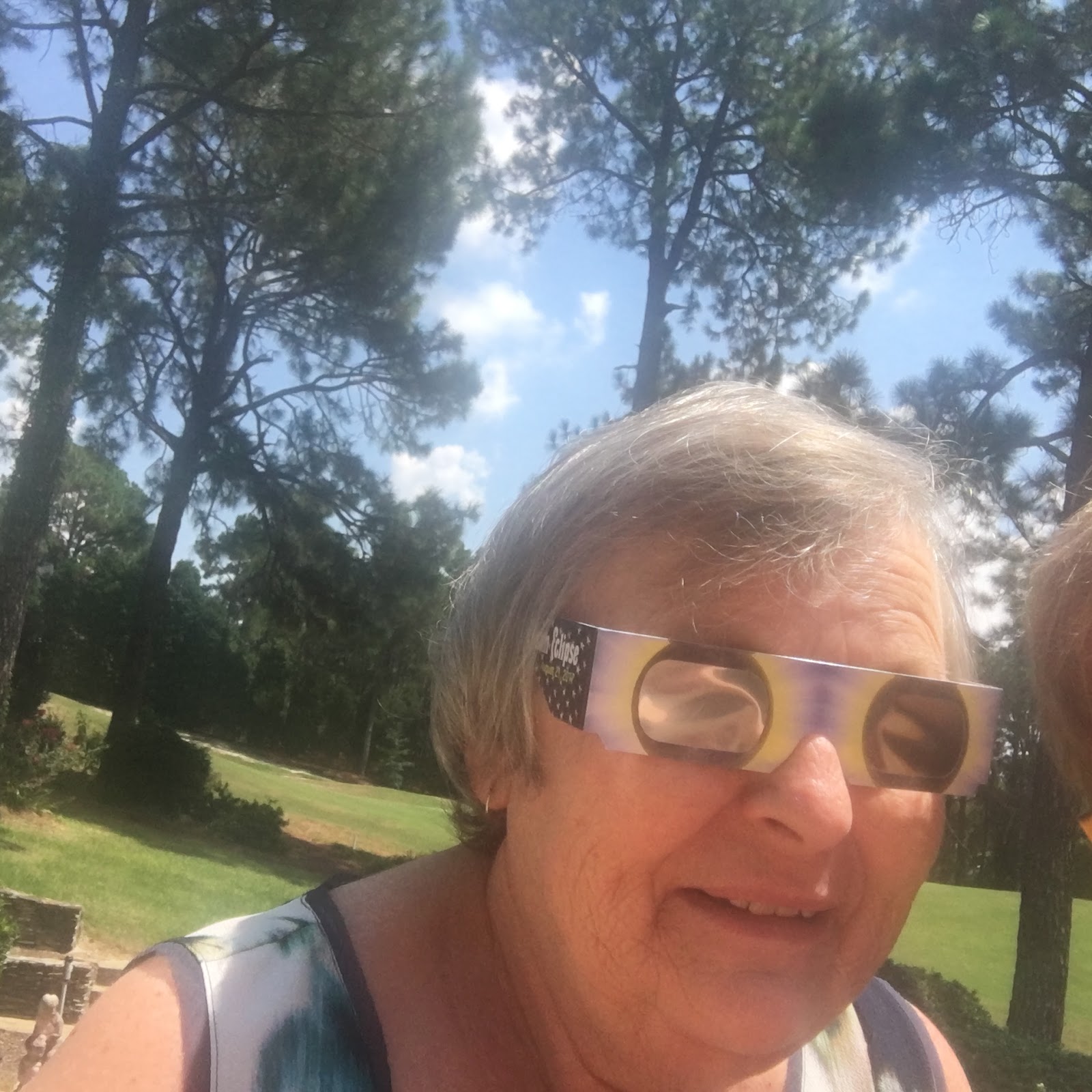 Totality came and there was silence, then a collective sigh throughout the neighborhood, then cheers, then the voice of someone saying “We don’t need glasses now.” I had trouble keeping mine on anyway, so gladly flung them off.

I saw a black circle with a very small band of golden light behind it. Around the black circle there seemed to be a ring of glitter….that silver kind, with sprinkles of color. Totally magnificent. The neighborhood was in a bed of  twilight. It was quiet (except for a few fireworks.) It was awe-inspiring. It was worth it. Not only the actual moments of life it took to view it, but the almost seven hours it took to get to Atlanta (where taking the Waze route may have advanced me a little here and there, but also took me on a dirt road in the middle of nowhere for over two miles in the dark of night. Thankfully the serial killers must have been in traffic. Or gone elsewhere for the eclipse.)

Of all of the photos I have seen at totality, and I have seen a lot, none have captured what my eyes saw. They are beautiful, but not “it”. Only one has even come close so far. But this is what I think. God has a pretty strong watermark. His work can’t be duplicated. But possibly in our memories.

For a few minutes a lot of us were simply looking to the heavens. Excited about a supernatural occurrence that really is simply a natural part of creation. Feeling unencumbered by worries of the world, but instead giddy with child-like wonder. Not afraid of the future. Bonding with the people around us, even when we couldn’t see them. Trusting that the universe was doing what it was supposed to do. Feeling like God was conducting an amazing cosmic ballet. For us.

While I may not remember what I saw at 10, I took a clear picture of this one in my mind. I will remember…..and smile.