I usually hate being the center of attention. Birthday attention particularly makes me want to squirm. Not that I don’t want people to acknowledge my birthday….in fact, it’s kinda nice for people to tell you that they are glad you were born or to have a happy day. But anything that has a crowd looking at me (or even a few) makes me a bit nauseous.

But this birthday was spent in Paris, TX, with some ballooning friends that made it fun. Yeah there was the uncomfortable singing….but they were almost in tune, and I was immediately distracted as I was doused in silly string. It’s cool and slimy, in case you have forgotten. But being surrounded by joyful people makes everything good…so it was.

But let me tell you the story about how we all got to this ranch for this relaxation and birthday celebration. Four years ago I was headed out to the Albuquerque Balloon Fiesta for the first time. Of course, I was very excited and couldn’t wait to be there. It was all great, until American Airlines delayed my flight from Charlotte to Dallas, and I missed my connecting flight to Albuquerque.

I jumped into action as soon as I saw it was a possibility, asking the agent to find me an alternate flight and looking for one myself online. But there was no flight into Albuquerque that night. In fact, they told me they could not guarantee me a seat for three days. I would have to camp out at the airport when flights were leaving and hope someone didn’t show up and I got a seat (with a hotel room provided by the airlines when no flights were available). As you may guess, there is much less of a chance of slots opening up on a plane when there is a world renowned/bucket list balloon festival on the other end. Dismay is probably a good word to describe the feeling.

So being the type that uses Facebook to tell my problems to my friends, I posted the problem. My friend Lisa called me immediately with a solution. She said friends of theirs were going to be driving from Dallas early the next morning. Did I want her to see if they would give me a ride? Of course I did!

They graciously said yes, I took the hotel room the airline offered for a few hours, and at 4:30 the next morning they picked me up at my hotel. They’ll say I just threw my luggage in the car and jumped in, but I did confirm it was them. I’m sure I did. Heck, how many women are pulling up at hotels at 4:30 in the morning and popping the trunk? How could it have been wrong?

So off I go to drive from Dallas to Albuquerque with two strangers. Lisa later told me that maybe she shouldn’t have exactly called them friends….she had met them once. Yes…l find that funny.

By the way, my friend Rob (another balloonist) also had some strangers on standby in case this arrangement didn’t work out. He contacted me a few minutes after Lisa. Sometimes you are lucky enough to have multiple friends who not only care about your problems, but notice your needs and work to find resources or solutions on your behalf. I cherish these folks more than they will ever know.

I had figured I would sleep most of the way to Albuquerque. Not possible. Sheri and Debra were best friends and are both talkers. Conversation didn’t stop. They made the journey a blast. We laughed the whole way. We stopped at places like the Cadillac Ranch. Never having driven through that part of the country, my eyes took it all in.

We made it to Albuquerque and I had two new friends. But why am I telling this story now? One of those friends, Sheri (on the right), hosted me at her ranch (in Paris, Tx where a balloon festival was going on) this weekend for my birthday. We played with horses, and dogs, and balloonists. There was four wheeling and pasture surfing, barbecue and chocolate cake. It was a mite windy, so no flying took place at the festival (we balloonists are used to that), but there were two balloon glows. All in all a great time with Sheri, Lisa, and Jim….and others I’d met in Albuquerque, and some new friends besides. The one thing all had in common was they were interesting and welcoming.

This could have been a hard birthday. The day before was the sixth month anniversary of being out of work and it’s getting old. But while it may not have been the time most people would take a vacation, travel breathes life into me. No phone and internet on the ranch was probably good for me, too. (I may be addicted. Who is surprised?)

Most of all the time with Sheri reminded me of something important. We all have those times when things don’t go as planned. Sometimes….hey, I’ll even say for me it is often….these times lead us to something even better. Great experiences and good times that bond you for life. Or really great stories. Sometimes both.

Don’t let your mind stick in the disappointments of upset plans. Look for the gift. Sometimes, if we’re lucky, the gift will become a permanent good thing in our life. I am grateful for that road trip to Albuquerque that was so much better than just another plane flight. The memories and the friends are now part of who I am.

I’m also grateful for those friends who remind me I’m not alone….that they are there for me when I need them and pick up on when I need a distraction (that means you, Lisa). There are those friends like Sheri who share their time, their stuff, and their encouragement.

And then there are the truly great folks ballooning has brought to my life. Multiple generations who enjoy each other…,and are always ready to celebrate. This introvert would usually prefer not to be the center of attention….but sometimes it’s nice to be the center of joy. I love you, my Texas friends. Thank you. We’ll always have Paris. 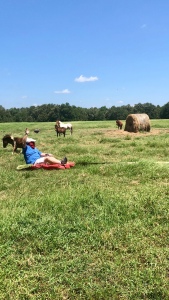